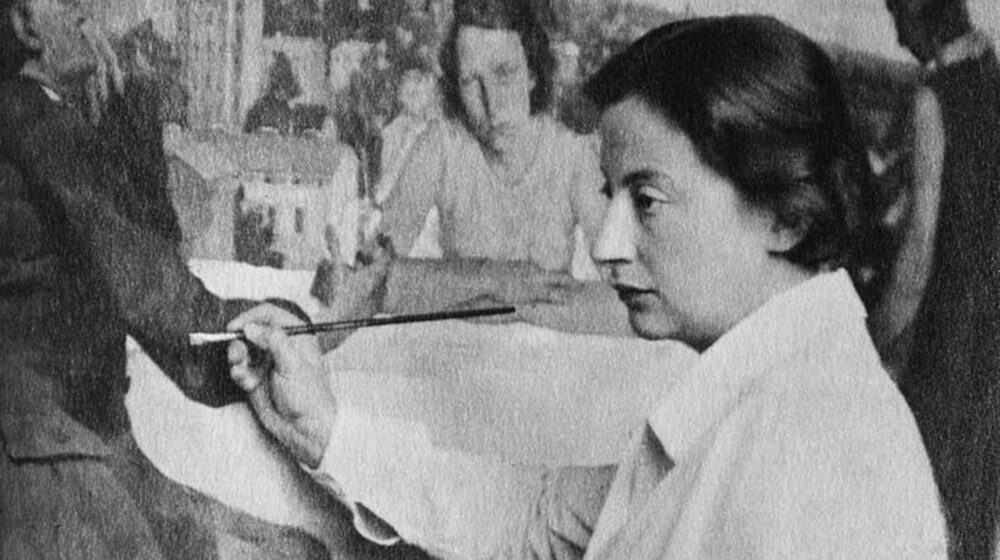 Her modern pictures of women would certainly have been “un-German” and avant-garde according to Nazi ideology. However, Lotte Laserstein was not threatened because of her style, but because she was considered a Jew according to the race laws – just like her mother Meta, her sister Käthe, and her sister’s girlfriend Rose Ollendorf, about whose persecution the Arolsen Archives holds several documents. Lotte herself managed to escape to Sweden, where she built a new existence for herself.

Lotte Laserstein was born on November 28, 1898, in Preußisch Holland (East Prussia) as the first daughter of wealthy pharmacist Hugo Laserstein and his Jewish wife Meta. Her father died young, and in 1912, her mother moved to Berlin with Lotte and her sister Käthe, who was two years younger. Lotte completed her high school diploma (Abitur) there and then began her studies and her practical training as a painter – initially with a private tutor. In 1921, two years after women were first allowed to study at the academies of art, Lotte enrolled at the Berlin Academy of Fine Arts. She completed her master’s degree there in 1927.

From 1927, Lotte worked tirelessly on her professional career as an artist. She set up her very first studio, opened a private art school, took part in competitions, and published her paintings in fashion magazines. She was also involved in artist associations, thus establishing a wide network offering her exhibition and sales opportunities.

»Lotte Laserstein – people will need to remember this name. The artist is among the very best of the younger generation of painters. Her glorious ascent is one to watch.«

End of career and exile

However, National Socialism brought Lotte’s ascent to an abrupt end. She was declared a “three-quarter Jew” and was increasingly excluded from artistic life from 1933 onwards: Anyone who was unable to produce proof of Aryan descent was not admitted to the Reichskulturkammer (Reich Chamber of Culture) and was no longer able to pursue their profession. This meant that Lotte could not get any painting supplies, was not allowed to exhibit her pictures, and had to close the art school. An exhibition of her work in Stockholm in 1937 finally gave her the opportunity to leave Germany with the majority of her paintings. Lotte spoke about this step later on in an interview:

»If I hadn’t had my own reality in my paintbox, in this little case, (…) I wouldn’t have been able to survive the years in which everything was taken from me: my family, my friends, and my home.«

Lotte’s mother and sister stayed in Berlin. According to a document in the Arolsen Archives, Käthe was meant to be taken with the 31st deportation transport from Berlin to Auschwitz on March 1, 1943. However, she clearly managed to hide shortly beforehand. After the war, her name appears on two lists of refugees who came to Sweden in August 1946. The sisters lived there reunited for many years until Käthe returned to Berlin in 1954.

Their mother Meta was arrested by the Gestapo in Berlin on July 27, 1942. Käthe and Lotte submitted a request for information about their mother to the Arolsen Archives after the war and stated that she died at the Ravensbrück concentration camp on January 16, 1943. We were unable to confirm this date of death to them from the information in our documents, although we could confirm Meta’s arrival in Ravensbrück on December 23, 1942.

The search for Rose

Käthe Laserstein’s life partner Rose Ollendorf had already been deported to the Lodz ghetto on October 18, 1941. Rose does not appear in our lists of deceased Jews from the Lodz ghetto for the Berlin transports. Lotte submitted a tracing inquiry regarding Rose to the Arolsen Archives in the early post-war period from Sweden.

Lotte continued to work as a portrait and landscape artist until she was over 90 years of age; she died on January 21, 1993, in the Swedish city of Kalmar, where she had lived since her sister Käthe returned to Berlin in the 1950s. Although Lotte was able to continue earning a living as a commission artist, like many other persecuted artists, she was not able to build on her earlier successes. Her work was forgotten and only rediscovered in the 1990s, to international acclaim.