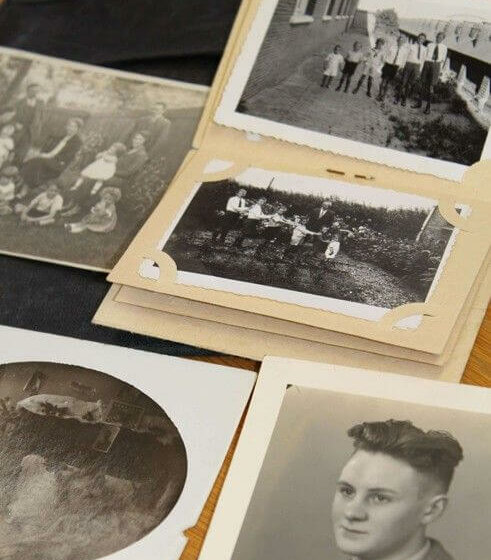 Shortly before being deported to the Neuengamme Concentration Camp, Dutch WWII resistance fighter Peter Will wrote a farewell letter to his wife and 6 sons. This letter, though, was never sent. Now, the International Tracing Service ITS was able to present Peter Will’s sons with his wallet, containing this letter and family photos.

In December 1943, 47-year-old Peter Will was arrested in Nijmegen. He had been active in the resistance, aiding Allied pilots who had been shot down, and distributing the forbidden newspaper Trouw. After several months of imprisonment he was handed over to the Nazi Security Service (SD) and taken to the Amersfoort Transit Camp in May 1944. When Peter Will heard that he was to be taken to a German concentration camp, he wrote a deeply emotional letter to his family. Peter Will died in the final days before the liberation during a journey on a train which was crowded with sick and weakened prisoners after the SS had cleared the Neuengamme Concentration Camp.

The resistance fighter must have hoped that the letter would reach his family by way of fellow prisoners or other means. This didn’t happen, however, until 2015, after a family acquaintance found out about the wallet while looking through the new online archive of the ITS, where she happened upon photos of the wallet. Her discovery helped to make possible the return of the wallet to the family after more than 7 decades. The resistance fighter’s two sons Peter (Jr.), born in 1928, and the 5-year younger son Joop Will came to the ITS in Bad Arolsen, accompanied by Peter Sr.’s  granddaughter and her husband.

“There is no end to the story for us“

Both brothers were deeply moved when they held the narrowly spaced handwritten lines of their father in their hands. To learn of the existence of this letter was almost a shock. Joop Will described the feeling: “It was extremely emotional for us. This isn’t something you expect anymore.” The family decided not to speak about the contents of the letter, which their father had addressed so intimately only to them. There were also photos in the wallet, among them one that showed the father and mother with the oldest sons. This, too, is a treasure for the family, as until then they had had only one picture of Peter Will (Sr.).

„There is no end to the story for us, it is always in our thoughts,” Joop Will says. His brother Peter and his oldest brother Bert, who himself had been a resistance fighter and who had been compelled to go into hiding, had meticulously traced the life of their father for the younger brothers and the generation of grandchildren, and had put together a small book about it. For their research they had visited the Nazi victims’ memorial sites and had set out on a journey to retrace the steps of their father, who had been forced to do slave labor in inhumane conditions in the Kommando Meppen-Versen, a satellite camp of the Neuengamme Concentration Camp. Peter Will (Jr.) explained that his family had received a bible, the wedding ring, and a fountain pen, handed to them in 1949 by the local authorities in Nijmegen. This was another reason why they had never guessed that there might be other personal objects. The wallet had actually been among the many prisoners’ belongings that the British Army had secured from the Neuengamme Concentration Camp near Husum in 1945. Before these so-called personal effects from urlNeuengamme came to the &nbsp;ITS in 1963, Peter Will’s wallet had been mistakenly matched to someone else’s name. Without the online placement of certain collections of the ITS archives in October 2015, the wallet would probably never have been able to be returned.

Little by little the fate of the father became clear

The past continued to follow the family of resistance fighter Peter Will. It started in the 1950’s, when they heard about a badge of honor being presented posthumously to Peter Will by the U.S. President, Dwight D. Eisenhower. They discovered that their father not only had distributed illegal newspapers, &nbsp;but that he had also helped Allied pilots who had been shot down to escape from the country. Through later conversations with war veterans they heard that their father, who had earned his living as a meat inspector, had hidden British and American pilots in an abandoned shed at the slaughterhouse. After learning this, the older sons recalled that their father would often stand on the terrace, holding a pair of binoculars, watching the air attacks and then would disappear.

For many years their search for information on Peter’s date of death and the gravesite was the most important thing for the family. The sons found out that their father Peter Will must have died sometime between 13 and 18 April 1945. The train with the sick prisoners had at first set out for Bergen-Belsen Concentration Camp on 8 April, and then, with the Allied Front closing in around Brandenburg, had circled the area near Hamburg. Peter Will was one of the 300 dead who were buried in a mass grave in Brillit on April 18. A total of 800 prisoners died on this train trip, a journey similar in many ways to the death marches. In 1954, the 300 dead were reburied in individual graves. In 1961 the family received a questionnaire about the father’s physical characteristics. Based on this information on height, bone fractures and the dental profile, specialists were able to make an exact identification. And so it was possible to bury Peter Will’s skeletal remains on a battlefield in Loenen in the Netherlands on 27 September 1966.