Stigmatized as a “Gypsy” from an Early Age 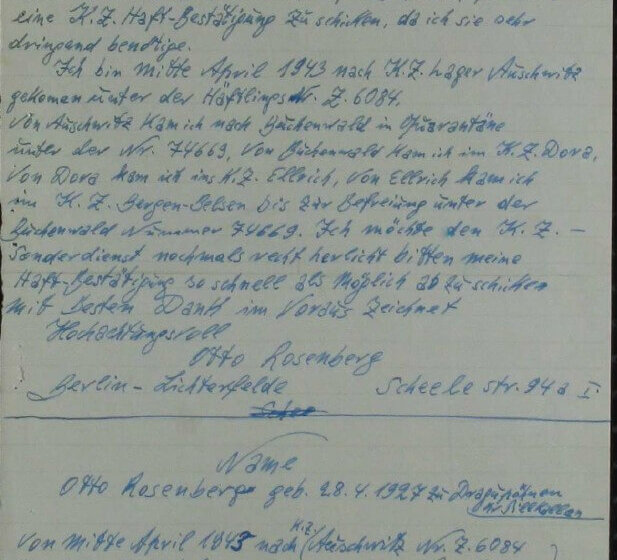 August 2 is the International Day of Remembrance of the National Socialist Genocide of the Sinti and Roma, to which some 500,000 persons persecuted as “Zigeuner” (“gypsies”) fell victim. On this day in 1944, 2,900 Sinti and Roma were murdered at the Auschwitz-Birkenau concentration camp on orders from the Chief Office of National Security. Otto Rosenberg was among the group of inmates who, on May 16, 1944, had managed to delay the clearance and liquidation of the camp temporarily by putting up resistance.

The Nazis labelled Otto Rosenberg an “Arbeitssch[euer] Zig[euner]” (“work-shy gypsy”) and deported him to the Auschwitz concentration camp in April 1943, just a few days before his fifteenth birthday. There the SS divested him of all his personal belongings and registered him. His inmate number Z 6084 was tattooed on his forearm. Yet his suffering had already begun many years earlier.

Stigmatized as a “gypsy” from an early age, Otto – a Sinto born in Draugupönen (East Prussia) on April 28, 1927 – had grown up in his grandmother’s home in Berlin. Not long before the 1936 Summer Olympics, he and his family were deported to the Berlin-Marzahn internment camp for Roma. He was nine years old at the time. From then on, he had to live in inhumane conditions and was no longer permitted to attend school. What is more, he and his family were made subjects of eugenic research by the SS. When he was thirteen, Otto was assigned to forced labor in an armaments factory in Berlin. There someone informed on him in 1942, and he was transferred to the Berlin-Moabit prison for alleged sabotage. After four months in isolation, he and his family were deported to the so-called “gypsy camp” in the Auschwitz-Birkenau concentration camp.

Otto Rosenberg was among those courageous inmates who banded together in the “gypsy camp” on May 16, 1944 and, by putting up resistance, managed to delay the liquidation of the family camp. When this liquidation finally took place after all in early August, the Nazis transferred Otto to the Buchenwald concentration camp. He told the SS he was three years older than he really was, so they would classify him as fit for work. After just three days in Buchenwald he was sent on to the Dora-Mittelbau concentration camp, where he performed forced labor in the underground tunnels and the Ellrich-Juliushütte subcamp. In April 1945, the British army liberated him in the Bergen-Belsen concentration camp. He was the only one of the family’s eleven children to survive the Nazi tyranny.

After the war, Rosenberg co-founded the Berlin-Brandenburg State Association of German Sinti and Roma and served as its chairman for many years. In order to receive recognition and compensation for what he had gone through in the various concentration camps, he contacted the ITS in Bad Arolsen in the 1950s –  at a time when post-war society continued to stigmatize this group of victims. He requested “most cordially” that a “confirmation of custody” be issued and sent to the responsible compensation authority. Although it was composed many years later, his handwritten letter to the ITS still testifies to the anguish he had suffered during the Third Reich.

In 1998, three years before his death, he was awarded the Cross of Merit 1st Class of the Federal Republic of Germany for his special services to understanding between the minority and the majority. He is nevertheless not known to a wide public—unlike his daughter Marianne Rosenberg, who made a career for herself as a pop singer, composer and author.

Kerstin Hofmann, Research Assistant Tracing at the ITS