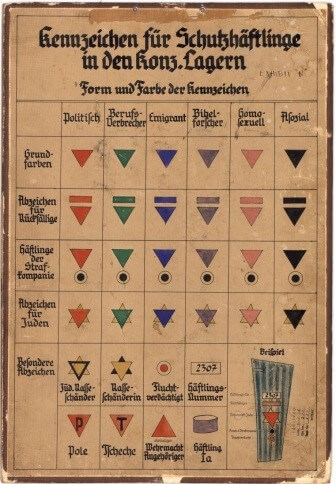 Six columns and five lines—that was all the Nazis needed to divide the people in the concentration camps into categories. One of the few surviving panels illustrating the cloth ID badges made its way to Arolsen after the war from the liberated Dachau concentration camp and is kept in the ITS archive.

Initially the inmates in the different concentration camps were distinguished visually from one another, for example through a specific uniform, colored circles and stripes, or a certain type of haircut. From the late 1930s onward, however, the practice of marking them by means of colored cloth triangles gradually came to prevail throughout the camp system. One of the few surviving panels illustrating the cloth ID badges made its way to Arolsen after the war from the liberated Dachau concentration camp and is kept in the ITS archive. Hardly any document appears in books about concentration camps as frequently as this overview.

Along with his or her inmate number, every concentration camp inmate had to sew a triangle of a certain color onto his/her jacket and trousers. Social Democrats, Communists, trade unionists and other persons regarded as political opponents by the Nazis wore red triangles. Often a joke about Hitler or a denunciation could suffice for someone to be arrested as a “political.” Green triangles were for so-called professional criminals. This group also included many persons who had been condemned for minor offences and didn’t fit into the image of the National Socialist community. The blue triangle was for emigrants—that is, German citizens who had left their native country after the Nazis came to power in 1933 but later returned, and were therefore suspected of espionage. Jehovah’s Witnesses, who were still referred to in those years as Bibelforscher (“Bible Researchers”), were persecuted because, for religious reasons, they refused to join Nazi organizations or serve in the military; they wore purple triangles. Homosexual inmates could be recognized by their pink triangles. And finally, black triangles were for all those whom the National Socialists considered “asocial,” for example homeless persons, beggars or persons without stable employment. Later another color was added: brown for Sinti and Roma. Jewish inmates wore an inverted yellow triangle beneath their colored triangle so that together the two would form a Star of David. It was to be immediately recognizable to everyone why a person had been committed to a concentration camp. However, the assignment to a particular group could be made arbitrarily to humiliate a person, and not every inmate would necessarily have described him/herself as a member of the respective group.

Christiane Weber, research associate in the ITS Department of Research and Education