A transport to Auschwitz is not a place where life begins … 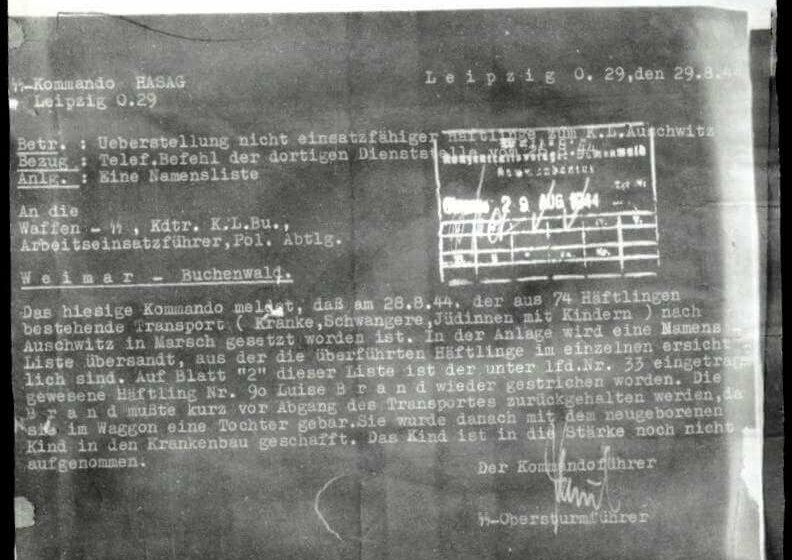 Luise Brand was twenty-seven years old when she was deported to the Buchenwald concentration camp from Poland on August 4, 1944 – and in her sixth month of pregnancy. Three weeks later she was declared “unfit for work” and her name was entered on a list for transport to Auschwitz.

A Jewess from Poland, Luise Brand had already been exploited for forced labor in the Hugo und Alfred Schneider Aktiengesellschaft (HASAG) munitions factory in Kamienna. Saxony’s largest armaments corporation, HASAG relied on Polish female forced laborers on a mass scale for its production activities in the German Reich and occupied Poland. The women lived in camps near the factories. When the plant in Kamienna closed down on August 1, 1944, the SS transported the inmates still considered fit for work to Leipzig. This led to the establishment of the Buchenwald concentration camp’s largest women’s subcamp, with more than 5,000 female inmates, in an area adjacent to the factory grounds.

The working and living conditions in the camp were severe. Anyone labelled “unfit for deployment” was sent away. Luise Brand’s name is on a transport list of August 27, 1944 along with 73 others: 14 Jewish mothers with their children, 31 women deemed “unfit for work” because of various illnesses, 6 adolescents between the ages of thirteen and sixteen who “because of their weak physiques” were considered “unfit for deployment in this camp,” and 5 pregnant women. The destination was changed in handwriting. The transport was now no longer headed for the Ravensbrück women’s concentration camp, but for Auschwitz.

Luise Brand’s name, however, was neatly crossed out with a ruler. In a memo to the Buchenwald concentration camp Armed SS, the detachment officer prosaically described the nightmare the young woman experienced on August 28, 1944: “Brand had to be kept back shortly before the transport departure because she had given birth to a daughter on the railroad car. Then she was taken to the infirmary with the newborn child.”

It is not known what became of Luise Brand after that. Her name does not appear on any other documents in the ITS archive. Her nameless little girl died on August 31, 1944.