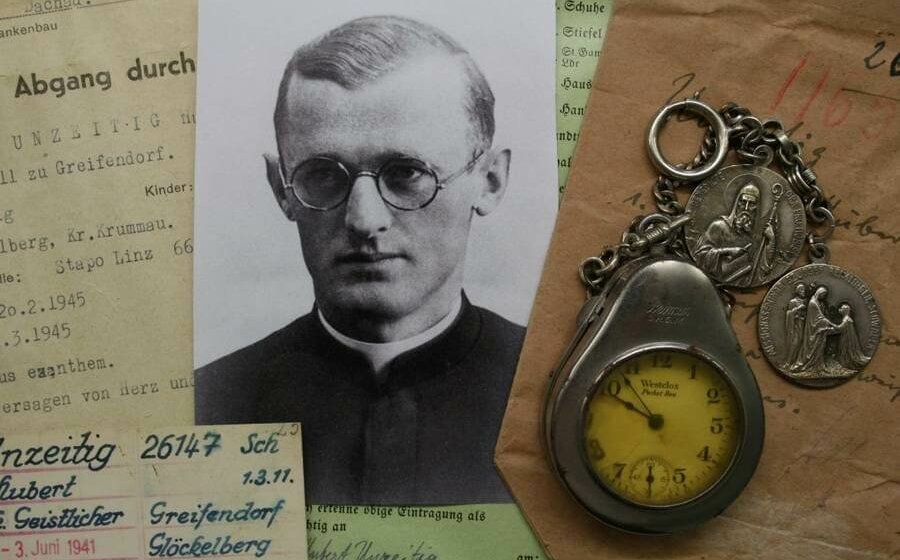 Father Engelmar Unzeitig died from typhus in March 1945 in Dachau Concentration Camp after he had been caring for other prisoners who had fallen ill. Last Wednesday the International Tracing Service (ITS) was able to return the Father’s pocket watch and two of his religious medals to two Brothers of his Order. These belongings were among the personal effects of former victims of Nazi persecution which the ITS has been holding in its archives since the mid 1960s.

“It is unbelievable that the personal belongings of our Brother have found their way back to our Order after so many years“. For Father Michael Maß CMM from the Religious Order of the Missionaries of Mariannhill, the fact of this happening now is especially significant, as Pope Francis had officially declared Father Engelmar Unzeitig a martyr of the Catholic Church in January 2016. His beatification will take place on 24 September 2016 in the Würzburg Cathedral“. A Brother regarded the message about the personal objects as being a sign from the heavens“, the representative of the Order tells. “Apart from a chalice, a Bible, and a Russian dictionary there are no other personal belongings handed down from Father Engelmar“.

Given the name Hubert Unzeitig at birth in 1911, Father Engelmar was arrested by the Nazi regime in April 1941 and deported on 3 June 1941 to Dachau Concentration Camp. He had spoken out publicly on behalf of persecuted Jews. Upon his arrival at the camp, the Nazis took his personal belongings – among these were the two medals and his pocket watch“. The medals hold a significant value for our religious Order“, Father Michael explains. “One of them is the Profess Medal that each Brother is presented with when he takes his monastic vows. The second medal was given to Father Engelmar while he was a pupil at the school run by the religious Order. The medals will probably be used as contact relics of the future Blessed“.

Caring for his fellow prisoners

Father Engelmar wrote numerous letters during his almost four-year incarceration in the Dachau Concentration Camp. In one of the last messages to his sister Adelhilde he wrote: “Love gives you two-fold strength, it makes you creative, makes you feel happy and free inside.“ In beatifying Father Unzeitig, the Catholic Church acknowledges that he kept his faith and, disregarding the life-threatening and inhuman conditions, cared for his fellow prisoners in need. He shared his food rations and gave pastoral care to fellow inmates. When typhus broke out in the camp in 1945, he volunteered to tend those who were stricken, but in nursing them he also became infected, and died from the disease. For his Brothers, Father Unzeitig is a true role model: “He showed us how important the belief in God is: regardless of where you live and regardless of how difficult the situation is“, Father Michael says.

Documents in the ITS Archive

During a visit to the ITS on 1 June 2016, the Brothers were able to view the original documents on the incarceration of Father Unzeitig. In addition to the prisoners lists of the concentration camp with the entries about Father Unzeitig, there is also a death notice in the archive. Anna Meier-Osiński, ITS Head of the Tracing Investigations into Nazi- Victims Branch, and her staff member Ulrike Witte explained the documents and, besides the pocket watch, also presented copies of the documents. “For the ITS these encounters are not only something special because we can give information about the objects we return“, Meier-Osiński emphasizes. “They also give us the opportunity to learn more about the lives of victims of Nazi persecution“.

To facilitate the return of as many as possible of the some 3,200 personal objects to families and loved ones of the original owners, the ITS placed photos of the effects on its online-archive in October 2015. Since the online-placement, twelve effects have been returned.