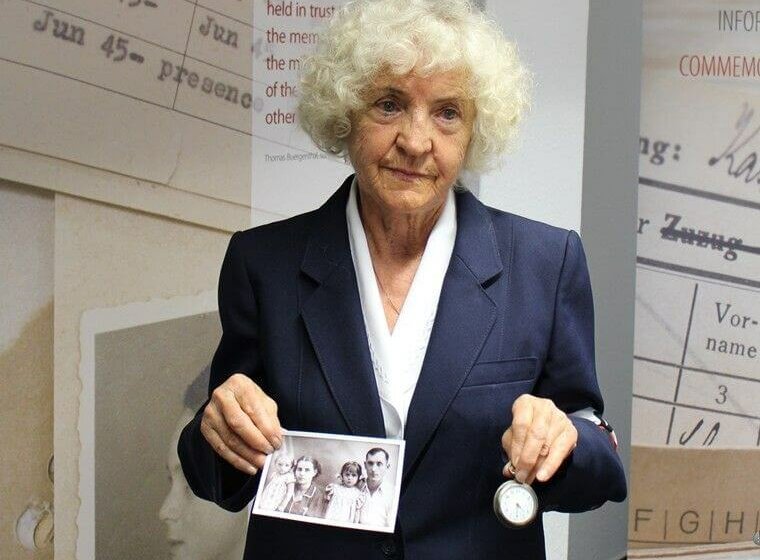 Czesław Bilnik from Zawiercie in Poland was imprisoned in the Gross-Rosen and Neuengamme concentration camps. Just days before the war ended in May 1945, he died in the tragic sinking of the Cap Arcona in the Bay of Lübeck. Seventy-two years later, with the aid of the Polish Institute of National Remembrance (IPN), his daughter Wanda Różycka-Bilnik discovered in the online archive of the International Tracing Service (ITS) that her father’s pocket watch was in safekeeping in Bad Arolsen. When she came to retrieve the watch from the ITS in July 2017, she told her family’s story.

Czesław Bilnik (b. 1909) was a member of the Polish Home Army (Armia Krajowa). His wife Marianna and he cared for wounded partisans in their home. Wanda was four years old when the Nazis arrested her father. “All I can remember is that my sister and I cried and screamed when those strange men forced their way into our flat and took my father with them.” After that day in the winter of 1943, she never saw him again.

The Nazis deported Czesław—a precision engineer by profession—to the Gross-Rosen concentration camp and from there to Neuengamme. “If the Gestapo had known we were hiding a wounded partisan at the time, they’d have set the whole house on fire,” Wanda comments. They didn’t find the young man. To this day, Wanda has the greatest admiration for her parents’ courage. She herself has fought for her beliefs her whole life long: as an early and longstanding member of the Solidarność movement she endured interrogations, and after the political turnaround in 1990 she received honors for her political dedication.

Czesław managed to write two letters to his family before he died. Wanda brought them with her to Bad Arolsen. “My mother watched over these letters like relics,” the 79-year-old recalls. “After National Socialism, we were persecuted by the Communists. We were dispossessed, and I had to take on a false identity in order to study at university. Nothing else remained of my father.” The silver pocket watch is all the more meaningful to her in view of these circumstances. When asked what she planned to do with it, Wanda Różycka-Bilnik replied resolutely: “I’m never going to part with it again. I might even take it with me to my grave.”