International Conference at ITS 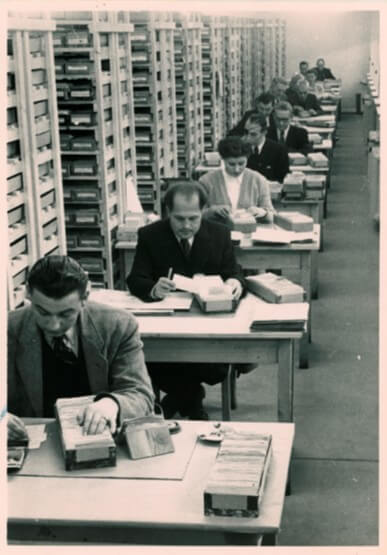 Bad Arolsen, October 4, 2018: In the international research on the crimes committed by the Nazis, there is one topic on which little light has been shed to date: the tracing and documentation of victims of Nazi persecution. To discuss this gap, the International Tracing Service (ITS) is hosting a conference entitled “Tracing and Documenting Victims of Nazi Persecution: History of the International Tracing Service (ITS) in Context” on October 8–9, 2018.

From the early search for persons and documents starting in 1944/45 to the online publication of documents that make tracing possible anyplace in the world: even after more than seven decades, the tracing and documentation of victims of Nazi persecution has lost nothing of its relevance. The cultural-historical dimension of this task will now be discussed within the framework of a scholarly conference for the first time. The ITS has invited experts from many countries to illuminate the role of tracing services and archives in the context of the efforts to come to terms with the Nazi crimes. “We would like to provide an impulse for research on the history of tracing and documenting—not only at the ITS but, broadly conceived, as one of the fields to which research has paid little attention to this day”, explained Henning Borggräfe, the head of research and education at the ITS.

Some 120 guests from twelve countries—among them Germany, Australia, England, Israel, Poland, Spain and the U.S.—have registered for the two-day conference. The setting will be the ITS facilities in Bad Arolsen in northern Hesse. It was there that, exactly seventy years ago, tracing agencies from various European countries met with the then newly founded ITS for a conference on how to organize the search.
The conference bears a connection to the first permanent exhibition on the history of the ITS scheduled to open in Bad Arolsen in the spring of 2019. Both the conference and the exhibition will encompass the period from the inception of the Allied tracing activities at the end of World War II to the present.

The ITS will publish the contributions and results of the conference next year in book form. Starting on October 8, persons interested in the conference will find up-to-date information on Twitter under the hashtag #its_history and can also use the platform to join in the discussion and ask questions.

Here you can find the conference program and flyer