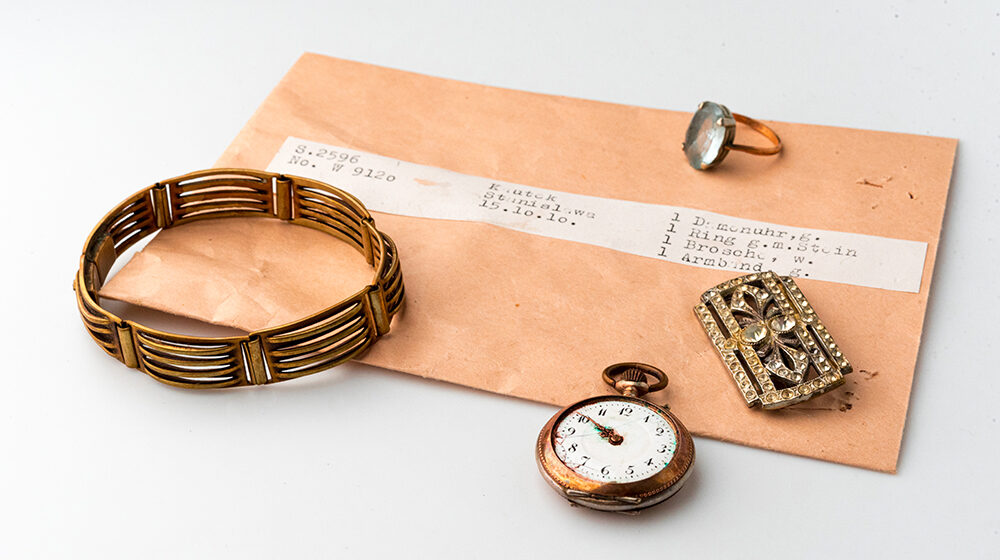 Together with the U.S. Consul General from Leipzig and the Lord Mayor of the City of Jena, the Arolsen Archives are officially opening a new international #StolenMemory exhibition container in Jena on October 6. The traveling exhibition, which is to tour through Germany and Poland, focuses on the last possessions of concentration camp prisoners and explores what can still be done today to return these so-called effects to the families of the victims.

The exhibition is housed in a shipping container and will be on show at the Johannistor in Jena until October 27.

The personal effects at the center of the exhibition were confiscated by the Nazis from prisoners on their arrival at a prison or concentration camp and have been preserved to this day. Some of the most common items were wedding rings, watches, pens, or wallets containing photos. #StolenMemory is a campaign by the Arolsen Archives to return these personal items to the relatives of their owners. Since the campaign was launched in 2016, almost 550 families have already been found. The exhibition features pictures of these last possessions and uses them to tell the stories of ten victims of Nazi persecution.

The section of the exhibition titled “Found” features items that have already been returned. Information about the lives of the former owners of the objects and the persecution they suffered is an important facet of the exhibition, but space is also given to exploring what these objects from the past mean to families today. Because the relatives themselves are also given the opportunity to have their say. Visitors to the exhibition can listen to these very personal first-hand accounts by calling up video portraits via an app on their mobile phones.

The “Searching” section focuses on objects that are still waiting to be returned. In fact, one of the most important messages of the exhibition is this: Anyone can help the Arolsen Archives to return personal effects to the families of their owners and can start their own search for clues about what happened to the persecutees and where their families are now. Because stolen mementoes belonging to nearly 2,500 people from all over Europe are still stored in the archive today.

The emotional value of the effects

“Families often know little or nothing about the fate of their grandparents, parents, uncles, and aunts,” explains Floriane Azoulay, the Director of the Arolsen Archives. This means that relatives are often very surprised when these items are returned to them: “Since about 800 of the effects were taken from Polish persecutees, we want to use the German-Polish container to expand our work in Poland, invite even more volunteers to do research at local level, and hand these mementoes back to the families.”

A generous donation from the U.S. diplomatic missions in Germany and Poland made it possible to commission the German-Polish exhibition container, which will be presented to the public for the first time during celebrations to mark German-American Day in Jena. After stops in Weimar and Görlitz, the container will travel through Poland in the coming year. U.S. support for #StolenMemory is part of America’s pledge to promote international Holocaust remembrance culture announced by U.S. Secretary of State Antony J. Blinken in Berlin in June 2021.

“We are thrilled to have found such an open-minded, interested host for the exhibition’s first stop. We are very happy to be here in Jena,” comments Floriane Azoulay. Together with Lord Mayor Dr. Thomas Nitzsche and the Consul General from the U.S. Consulate General in Leipzig Ken Toko, she will open the exhibition at the Johannistor (Am Pulverturm) on Wednesday, October 6, at 3 p.m. Afterwards, a panel discussion on “Combating Antisemitism” will be held at 4 p.m. at the University of Jena. The Arolsen Archives are grateful to KoKont Jena for their support in realizing the exhibition.

The exhibition is accompanied by a website, stolenmemory.org, which provides a wealth of fascinating insights. Short animated films with supplementary web stories tell of the fates of a number of individuals. These materials have been specially developed for young people and received the prestigious “Grimme Online Award” in the category “Knowledge and Education” in June 2021. The website also provides a wide range of educational materials which can be downloaded free of charge for use by schools and educational institutions in all the places visited by the traveling exhibition.

To #StolenMemory
Contact our Press Office
Press Photos for this topic

The Arolsen Archives are looking for relatives of Jadwiga Janina Kantek.