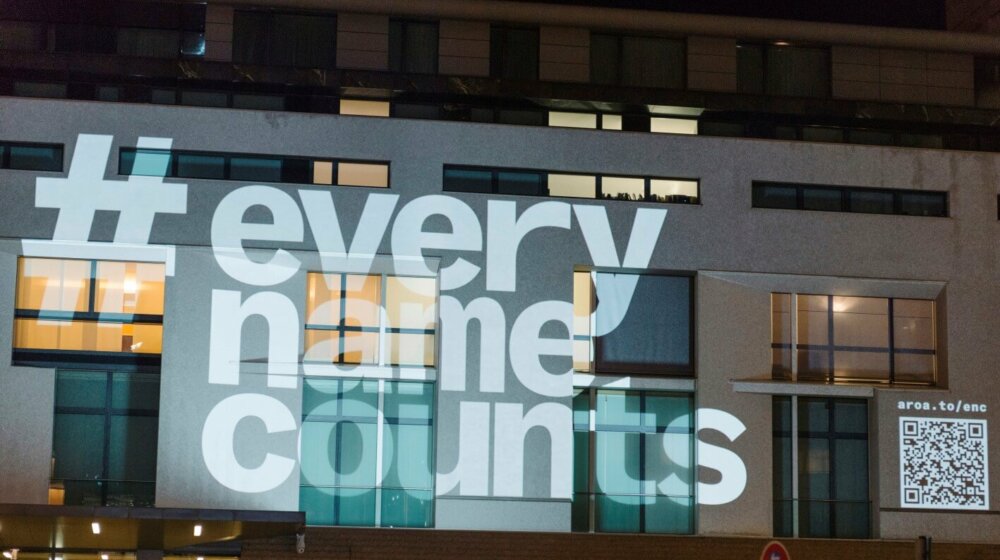 “Impressive,” “total goose bumps,” “great project,” “gets under your skin”: Our media installation on the façade of the French Embassy in Berlin reached and moved many people through the live stream on Thursday. The installation kicked off #everynamecounts, a crowdsourcing campaign by the Arolsen Archives which aims to establish a digital memorial to the people persecuted by the Nazis. A growing number of volunteers are supporting us, along with many schools, organizations and companies.

The media installation is a digital commemorative project that can now be viewed daily (from 5 to 10 p.m.) throughout the activity week, ending on Holocaust Remembrance Day on January 27. The activity week will involve numerous calls to action on social media to encourage as many people as possible worldwide to participate in #everynamecounts.

The premiere of the installation on January 21 was attended by Monika Grütters (former Minister of State and sponsor of the #everynamecounts project), and Ambassador Michaela Küchler from the Federal Foreign Office. Together with French Ambassador Anne-Marie Descôtes and our Director Floriane Azoulay, they led by example after the premiere and used computers inside the embassy building to transcribe data for the project. This is what #everynamecounts is all about: Everyone can make their mark, donate their time and help us record names to create our digital memorial.

Die Tagesschau reported on the kick-off of the installation (21.01.)

“#everynamecounts is an innovative and sophisticated tool that aims to raise awareness and knowledge. In doing so, the project succeeds in creating a living and critical memory. This creates an active culture of remembrance that appeals to younger generations and thus forms one of the cornerstones of our democratic societies.”

Reaching younger generations and creating a lively and emotional commemorative project – this is not only the mission of #everynamecounts, it is also the goal of the evocative media installation in Berlin, which is drawing attention to the project and projecting the names of the victims into public awareness. Till Botterweck, the creative director of the URBANSCREEN production studio, explains how he and his team approached the project:

To the media installation

For the relaunch of #everynamecounts, the Arolsen Archives provided access to more than 600,000 documents from various concentration camps, including Auschwitz, Buchenwald and Dachau, which anyone can now easily work with on the Zooniverse crowdsourcing platform. Most of the uploaded documents are originals from our archive. Over the course of the year, we plan to upload hundreds of thousands of additional documents. On the platform, volunteers can choose between different types of documents from multiple camps as well as different levels of complexity. In this way, everyone can make a contribution in accordance with their interests.

Our partners and supporters

In addition to thousands of volunteers, we also need the help of numerous organizations and companies with their employees. Schools and universities can also make a contribution. Exclusive partners such as the Auschwitz-Birkenau State Museum have helped us from the start so we can offer even more documents. We have already acquired many new supporters for the relaunch of #everynamecounts, including the UNESCO Project Schools and the Anne Frank House.

Become a partner
Support us