A thousand kilometers for his mother’s ring 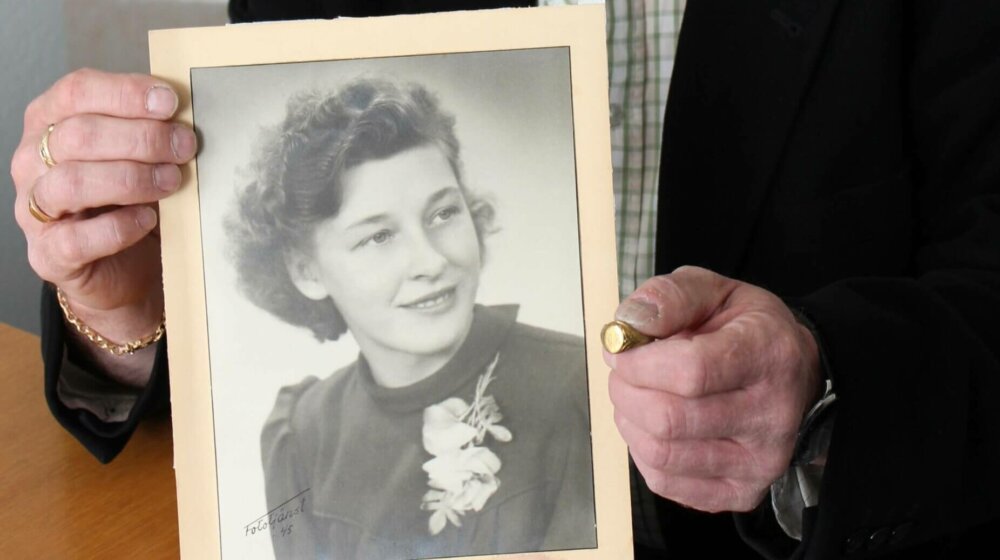 His mother survived forced labor and the Nazi concentration camps, eventually emigrating to Sweden. She kept her experiences to herself. Her son is now researching her past and, at the ITS, an Archive and Documentation Center on Nazi persecution, he has found his mother’s golden ring.

Jan Anderson was very moved when, in May 2016, a staff member of the International Tracing Service (ITS) handed him a ring that Jan’s mother had been wearing when she was arrested by the Nazis in 1944. “There’s an inscription on it. It could be a friendship ring, or even an engagement ring”, he said, as he looked at it carefully.

Journey into the past

Jan Andersen, Swedish, set out on a journey with his wife to trace his mother’s past, his first stop being at the ITS in Bad Arolsen. While processing his inquiry regarding his mother’s path of persecution, it was discovered that, in addition to the documents and information about his mother’s fate found in the archives, the ITS also had a ring of hers among the some 3,200 effects (personal belongings) from concentration camp prisoners. It meant a great deal to 62-year-old Jan to come to the ITS, look into the documents about the fate of his mother and to have her ring presented to him. “This is a very big day for me”.

His mother, Eugenia Genowefa Mazuchowska, was from Poland. At the age of 15 she was deported by the Nazis to do forced labor in Germany. The reason for the Gestapo incarcerating her in Celle in 1944 is not clear from the information in the documents. After a short imprisonment in the Landgerichtsgefängnis Lüneburg (Lüneburg state court prison), the then 19-year-old was first sent to Ravensbrück Concentration Camp, and then, 3 months later, to Neuengamme Concentration Camp. “Protective Custody” is noted as the reason for the arrest. Based on the “Reichstagsbrandverordnung” (Reichstag-Fire Decree) from 1933, “protective custody“ became an instrument of the Nazis allowing them to arrest and imprison people without judicial control. Upon arriving at Concentration Camp Neuengamme, Eugenia Genowefa Mazuchowska was forced to relinquish her ring.

Jan Anderson’s mother survived the concentration camps. She was one of the some 20,000 people who, by way of the “Operation White Buses” begun in March 1945 by the Swedish Red Cross, were rescued from the German concentration camps and who found a new home in Sweden. Now, after 72 years, her ring has made it back to the family – as a remembrance of the injustice that she had had to endure, but which she had hardly ever talked about. “She kept it all to herself”, her son told during his visit. “Whenever she heard German on the television, she left the room”.

Jan Anderson plans to document his mother’s fate for his children and grandchildren, and to keep alive the memory of his mother and her family in Poland. This is why he is continuing his research, and, following his visit at the ITS, he travelled on to Poland, to meet his mother’s sister there. He was looking forward to showing her this very special ring.

Where can families search for effects and documents of former victims of Nazi persecution?

In October 2015 the ITS released photos online of all of the personal effects kept in its archive – these can be seen on its globally accessible Online-Archive. Since then, 12 belongings have been returned. Jan Anderson is the first to have travelled from Sweden to be presented with a loved one’s personal effect.