The Exhibition #StolenMemory in Innsbruck 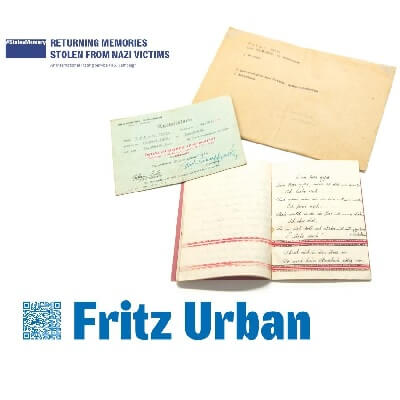 The International Tracing Service (ITS) has already returned some 200 personal belongings of concentration camp inmates to the families of their onetime owners. The organization is still looking for the relatives of nearly 3,000 victims of Nazi persecution. The exhibition #StolenMemory informs viewers about this ITS campaign. After its opening on October 2, 2018, it will remain on view in Innsbruck until the end of the year.

Posters with people’s names and photos of the objects they had with them when they were arrested by the Nazis will be on display in Innsbruck starting October 2, 2018. Pocket watches and wristwatches, rings, wallets, family photos, and everyday items such as combs open a small window onto their lives prior to persecution. The posters provide an overview of these people’s fates – based on documents held in the ITS archive. The majority of the items belonged to imprisoned forced laborers, primarily from Poland, Ukraine and Russia, and came to the ITS from the Neuengamme concentration camp, from Dachau, and in a few cases,, from Bergen-Belsen.

The #StolenMemory exhibition is part of a campaign launched by the ITS for the purpose of returning the personal possessions to the families of their former owners. “Some of the posters explain what it means to people to hold these mementoes in their hands,” said ITS Director Floriane Azoulay. “The others show objects whose rightful owners have yet to be found. The more people support us in our search, the faster we can return them.”

Over the past months, with the support of the Austrian Red Cross, the ITS has been carrying out an in-depth search for the families of about 20 concentration camp inmates from Austria and has managed to find several of them. Most of the persecution victims had been deported to concentration camps as “professional criminals” or “asocials.” Convictions for minor offences, and even just unemployment, sufficed to be put in so-called protective custody. The assignment to a particular inmate category was also sometimes subject to whim, and a means of further humiliating an inmate. The stigmatizations brought about by this practice are often still a source of pain and shame for the families to this day. These inmate groups are therefore hardly represented in the exhibition – most families do not want their relatives’ status under the Nazis to be publicized.

In one case of a man incarcerated as a “Communist,” the ITS succeeded in returning his personal belongings to his son. The latter likewise did not want this circumstance reported in the media. On account of his father’s concentration camp imprisonment, the family had suffered from ostracism for many years. It had taken a long time for the wounds to heal, he said, and in the current political climate in Austria he didn’t want them reopened.

All information on the exhibition

Opening:
October 2, 2018 at the Institute of Archaeologies of the University of  Innsbruck, at 7.00 pm

Event calendar of the University of Innsbruck