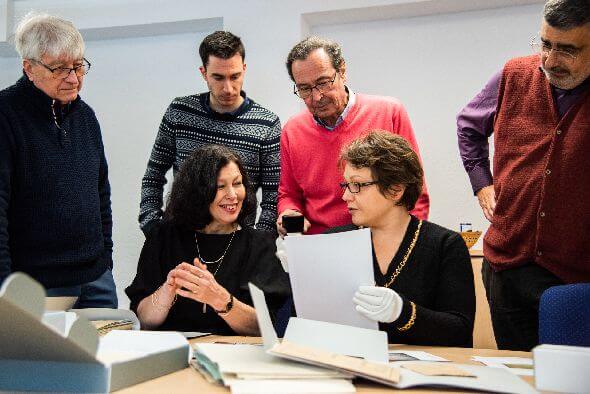 Braulia Cánovas Mulero was only twenty when she joined the French resistance, taking on the code name “Monique.” In 1943, the Nazis arrested her in Perpignan and deported her to Germany. She was in various concentration camps, and finally liberated in Bergen-Belsen. Her wristwatch and ring remained among the personal belongings of inmates of the Neuengamme concentration camp. Braulia’s large family came to Bad Arolsen in December 2018 to retrieve the items.

“I’m surprised. I never would have thought we would receive possessions of my mother’s,” Marie Christine Jené reflected. While carrying out research for the #StolenMemory campaign, a volunteer had learned about the watch and ring in the ITS archive and contacted the family. “On the one hand, the thought that her things were stolen from her makes me sad,” Marie Christine explained. “But I’m also happy because Germany, which is aware of all the damage, was capable of asking for forgiveness.” Marie Christine came to Bad Arolsen with her brother and eight other relatives from Paris, Barcelona and Girona to retrieve the personal belongings. It was also a special day for Braulia’s grandson: “My grandmother fought against fascism. That must never be forgotten. I’m very proud of her!”

Braulia Cánovas Mulero was born in Alhama de Murcia, Spain in 1920. The family moved to Barcelona in the 1930s. At the end of the Spanish Civil War, Braulia emigrated to France, one of approximately 500,000 republicans who sought to escape Franco’s control by going into exile. In Southern France, she joined the French resistance against Nazi Germany. She was only twenty years old. The Nazis arrested “Monique” in 1943 and deported her. She performed forced labor, first at the Ravensbrück women’s camp and then in a subcamp of the Neuengamme concentration camp. As the Allies approached, the SS sent the inmates on a death march to the Bergen-Belsen concentration camp, where she was liberated on April 15, 1945. She had contracted typhus and was more dead than alive. As we learned from her daughter, she was unconscious for several weeks and only survived because a fellow inmate, a Romanian, fed and took care of her.

After the liberation, the French government housed returning concentration camp inmates in the “Lutetia” in Paris, once a luxury hotel. The German secret service had been stationed there during the war and carried out operations against the resistance. Braulia was among those to live at the Lutetia for the time and regain her strength.

When Marie Christine Jené talks about her mother, she never forgets to mention her charisma. “My mother always came across as very young and very happy. No one would have thought she had been in a concentration camp. She was full of energy until the end, but she only lived to be seventy-three. That’s where the consequences made themselves felt. I wish my mother was alive and could enjoy this moment.”

In 1988, Braulia was awarded an order of merit—the Croix de grand officier de la légion d’honneur—for her activities in the resistance.