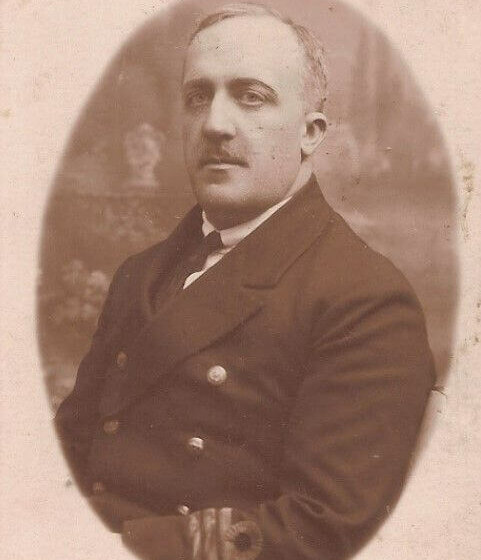 “After all these years, these will be the only things we have to remember our grandfather by,” wrote Tomasz Ściegienny when he heard that the Arolsen Archives had some of his grandfather’s personal belongings. The description he wrote of Rafał Czeczotts’s eventful life, which he has made available to the Arolsen Archives, shows just how much these memories mean to his grandson.

Born in Borowa in Silesia in 1891, Rafał Czeczott had dedicated his life to military service. After graduating from the military academy in St Petersburg, he served as a naval officer in World War I and studied at the École de Guerre Navale in Paris. In 1935, he published a book titled “Wojna morska na Bałtyku 1914-1918” [War in the Baltic 1914-1918], in which he described his experiences on the battleship Połtawa. “This work was very well received and was seen as a valuable eyewitness account”, writes his grandson.

After the outbreak of the October Revolution, a coup led by the communist Bolsheviks, Rafał Czeczott found refuge with a cousin in St Petersburg before being arrested and imprisoned in the Butyrka prison in Moscow. He did not return to Poland until 1923/24. In 1926, he married Irena Kotkowska from Warsaw and their daughter Zofia was born shortly afterwards. A few years later, Rafał Czeczott was appointed commander of the “Department for Naval Affairs” of Division II of the General Staff of the Polish army – an organizational unit which dealt with secret service, counter-espionage and foreign affairs. The family now lived in Warsaw and Rafał started to build a house for them to live in.

During the Second World War, Rafał Czeczott and his wife were active in the resistance against the German occupation. During the Warsaw Uprising, Rafał supported the Polish Home Army. After the suppression of the Uprising, the National Socialists arrested the entire Czeczott family ¬– they later deported Rafał to the Neuengamme concentration camp and his wife and daughter to Ravensbrück. Their daughter was the only one to survive and return to Warsaw.