Betrayal by a Brother in Faith 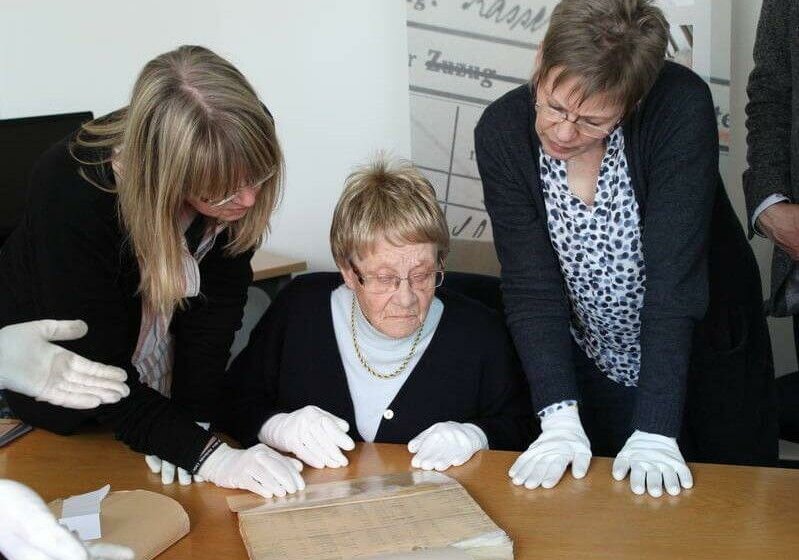 Fritz Dinstühler’s story is an example of the difficult role of churchmen under the Nazi regime. The Catholic priest was a courageous opponent of National Socialism. A fellow pastor betrayed him.

“My uncle never left our house without blessing us. And the only reason I like vegetable soup now is because we always cooked it especially for him.” During her visit to Bad Arolsen, the 88-year-old Anna-Regina Cremer many stories about her favorite uncle. She was twelve years old when the pastor was arrested by the Nazis on charges of treason in January 1945. She never saw him again: Dinstühler died in the Buchenwald concentration camp a short time later. Anna-Regina and her family have been researching his story for many years. Just recently, she came to the ITS with her two daughters and sons-in-law to examine the original documents pertaining to Fritz Dinstühler—and thus to gain a more complete impression of the ordeals he suffered.

The dedicated Nazi opponent had his first run-in with the regime in 1936. In Dinstühler’s parish, a professor had given a lecture about the “Jewish question” and spoken disparagingly about the Old Testament. The priest commented in his next sermon: “You needn’t take such moral blows again in the future, or such offenses to your feelings. The Holy Scripture in its entirety, also the Old Testament, is God’s word.” The Gestapo arrested him immediately. In the interrogation, he reportedly said: “What do I have to do with the state’s attitude towards Jews?” The district president responded by withdrawing the pastor’s authorization to teach religion in the schools.

What ultimately sealed Dinstühler’s fate was his refusal to abandon his parish. The village had been evacuated for war reasons at the end of 1944. Only a few miners had stayed behind—and the pastor continued to hold worship services for them in the cellar of the parish house. He told that to a fellow minister he’d been friendly with as a student. The colleague reported him to the Gestapo the very same day. Dinstühler was arrested and died a few months later, presumably in Ohrdruf, a subcamp of Buchenwald.

The ITS documents provide no reliable information about the exact date and place of his death. The records of his imprisonment trace an arduous, disease-ridden path through the camp system. “My uncle was very corpulent and unaccustomed to physical work, and had also already had a few operations,” his niece explained. According to a medical form from the Buchenwald concentration camp, however, the 5’6”-tall man weighed a mere 155 pounds just four weeks after his arrest. On that form, the camp administration fastidiously recorded his health history – his heart defect, hernia operation and other afflictions. He was nevertheless classified as fit to work: his name appears on a list drawn up for a prisoner transport to the Ohrdruf subcamp just one week later. The inmates there had to perform extremely heavy labor in a tunnel.

The last mention of Dinstühler is on a list of inmates no longer able to work and designated for transport to the Bergen-Belsen extermination camp on March 13, 1945. He was presumably spared that fate: “After the war, an eye witness told my family that Uncle Fritz had already perished in Ohrdruf,” said his niece. Her eyes filled with tears as she looked at his last signatures on the concentration camp documents.