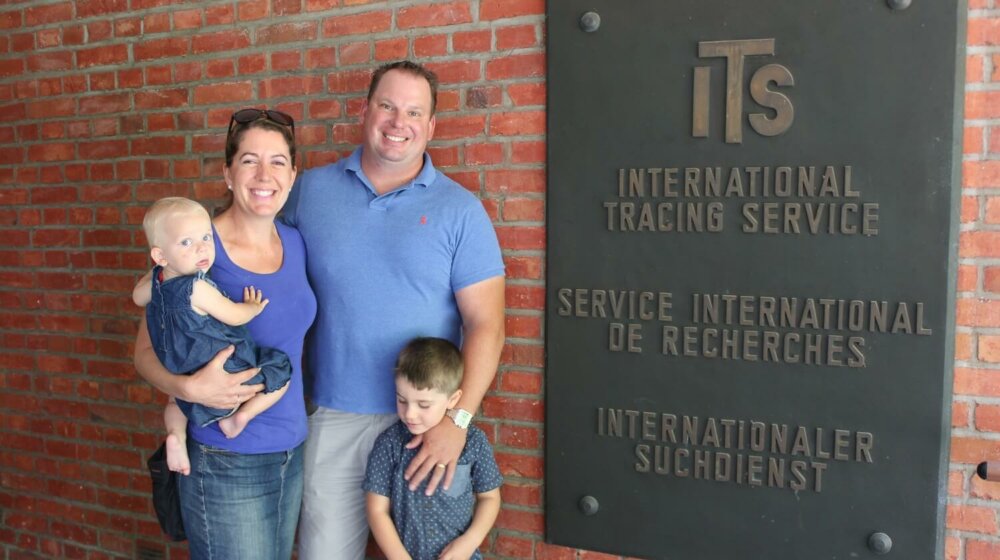 Ellis de Vries was born on October 15, 1944, in the Theresienstadt ghetto. It was a miracle that both mother and daughter survived. Most members of the Jewish de Vries family were deported via the Westerbork transit camp directly to Auschwitz or Sobibor, where they were murdered. Helena de Vries, who was pregnant, was put on a different list.

“I want to be able to tell my children the story of their family.” The Australian Lucy Stoxen is the daughter of Ellis de Vries. In July 2018 she traveled to Poland and Germany to learn more about her family’s fate. One stop on her journey, which she took with her husband and their two children, was the International Tracing Service (ITS). A member of the Jewish community had advised her to visit the archive in Bad Arolsen.

Only four relatives from her immediate family survived the Holocaust: her mother and grandmother, as well as a great-aunt and a second cousin, Alexander, both of whom went into hiding in Amsterdam. After her grandmother died, this second cousin gave Lucy Stoxen a list with the names of more than 50 family members – all murdered by the Nazis. This is how Lucy Stoxen was first confronted with her family’s fate at the age of 16.

Her grandmother had emigrated with her new husband and her daughter, Ellis, to a small town near Perth in Australia. She drew a very firm line under the past; she never talked about persecution and murder, about her own fate or the happy, privileged life her family had previously led thanks to the textile business. She had no contact with other survivors in Australia. Her children grew up only speaking English. She forbid her two relatives in Amsterdam from ever talking about the time before 1945. This is why her daughter Ellis found out so late in life that she had not been born in Amsterdam but in Theresienstadt. To this day she does not know who her biological father was.

“I’m the one who can finally bring together all of the information about the family,” Lucy Stoxen says of the responsibility she has taken on. “My grandmother and my mother didn’t want to do it.” She explains that she and her mother attended a memorial event for the Jewish community a few years ago, at which the names of Holocaust survivors were listed in a booklet. “I whispered to her that her name was missing. She waved it off, because she doesn’t view herself that way.”

Since Lucy Stoxen had contacted the ITS and traveled to Arolsen at the last minute, ITS staff member Kerstin Hofmann could not search for information on all of her relatives. In many cases, there are precisely three document types: the registration card for Jews in Holland, a transport list from Westerbork, and then the long list of Dutch Jews who were murdered. Lucy Stoxen often finds tears in her eyes. It has been a small comfort to learn that her relatives spent only a few days in the extermination camps before they were murdered, so they didn’t have to suffer too long.

This visit was just the first step; all of the names will gradually be researched by the ITS, and copies of all available documents will be mailed to Australia. Lucy Stoxen will also send information about a very distant relative to the ITS, whom she suspects might have survived. The ITS will try to find traces of her fate.