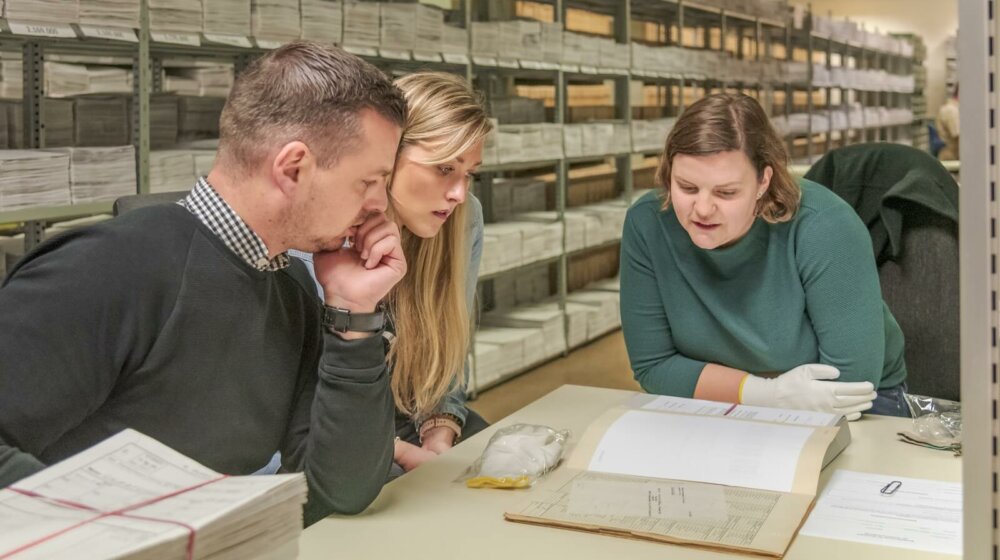 What began with fan trips to memorial sites has evolved into a historical and political education programme in which Borussia Dortmund, BVB, makes a clear stand against racism, anti-semitism and discrimination. Daniel Lörcher is one of the people behind the project. He and his colleague Amelie Gorden visited the Arolsen Archives in autumn 2019 to conduct research and discuss possible cooperation.

Mr Lörcher, it is quite unusual for football clubs to state their position so clearly. How did your programme develop?

Daniel Lörcher: I would find it difficult to give you a short answer. Let me try by providing a few pointers. BVB offered the first trip to a memorial site during the away match against Bayern München in 2008. Taking part was a profound experience for me. Later on, BVB organised visits to the memorial sites in Dachau and Sachsenhausen when we played in Munich and Berlin. The idea was to use football to communicate an important topic. We offered the first trip to the Auschwitz-Birkenau Memorial in 2011. One of the ultra groups had suggested the idea and BVB covered some of the costs. I have been responsible for memorial and educational projects at BVB since 2013. It is now an integral part of the club’s anti-discrimination work.

Your roots are in the fan scene. But now you have turned your fascination into a profession, is that right?

Daniel Lörcher: Yes, I am in charge of the Corporate Responsibility Department, and our memorial projects are part of the efforts there to combat discrimination.

Can you describe the projects or trips?

Daniel Lörcher: We are concerned to do more than just organise trips to a memorial. So, we always have preparatory and follow-up meetings to allow time for a more in-depth discussion. The local connection is a special part of our programme. We research individual fates and visit former homes or the Südbahnhof railway station in Dortmund, which was used to deport Jews to the Zamość ghetto in east Poland and elsewhere. Four weeks later we travel to the station in Zamość where the trains arrived. We also walk through the streets of the former ghetto to grasp what life must have been like. A preserved letter helps us to understand the ghetto’s layout. The former cemetery is now a playing field and nothing is there to indicate its historical significance. We also discuss what it meant to Polish Jews when a train from Dortmund arrived. The German occupiers deported these people to the extermination camps so as to make space.

Who takes part in these trips?

Amelie Gorden: Fans, but the wide range of age groups is interesting. The youngest are 18, while our oldest participant so far was 74. The groups are always mixed.

Daniel Lörcher: We know that we cannot reach right-wingers and their sympathisers. We cannot solve the problem of existing Nazi structures. But we can offer an alternative: so, we are reaching out to committed fans and to everyone who might still be sitting on the fence. Our aim is to build networks. After all, the participants talk to their friends and families about the workshops and trips, which increases our range.

What kind of feedback to the programme do you receive? Are you satisfied?

Amelie Gorden: Definitely. Usually around 120 people apply for a place. We can accommodate groups of between 30 and 35. They each pay €50, and Borussia Dortmund covers the remaining costs.

Have players ever taken part in the trips?

Daniel Lörcher: No, they are not our target group. But we have been accompanied by officials and club legends, because they are important to BVB in the long term. Lars Ricken, for example, joined us for an educational trip to Auschwitz. But the team does visibly promote our concerns, for example by showing the #WeRemember banner in the stadium to mark Holocaust Remembrance Day. Our sponsors are also very interested. We now offer events for BVB’s partner companies as well. That’s a courageous step for sponsors, as it means they are saying: We know that there is a problem, and we stand shoulder to shoulder with the club. It has also become extremely topical at work, and our colleagues are keen to become involved.

Why did you come to the Arolsen Archives today?

Daniel Lörcher: We attended a workshop given by your colleague Christiane Weber during the last Never Again Day in Frankfurt. Before that we had only encountered the archive during research on the internet. We have a few touchpoints. We both focus on actual biographies and personal documents in order to establish a connection to the local history of National Socialism in Dortmund.

A football club and an archive about those persecuted by the Nazis. It is an unusual mix. Ms Weber, what might this cooperation look like?

Christiane Weber: First of all, let me say how much I admire the work that Daniel and Amelie are doing. It’s impressive what they have built at BVB.  Amelie sent us the first names before today’s visit, and we do actually have personal documents about many of these people. We would be happy to search through our archives and make copies of the documents for the BVB educational events. In addition, we are thinking of using our documents to assemble special pedagogical materials for working with football fans. Memorial work with fan groups and clubs should focus on the biographies of persecuted club members.

Daniel Lörcher: I find all of this fascinating, and we are already in contact with many colleagues at other clubs. There is a huge demand for educational material on this topic.

Thank you for talking with us!