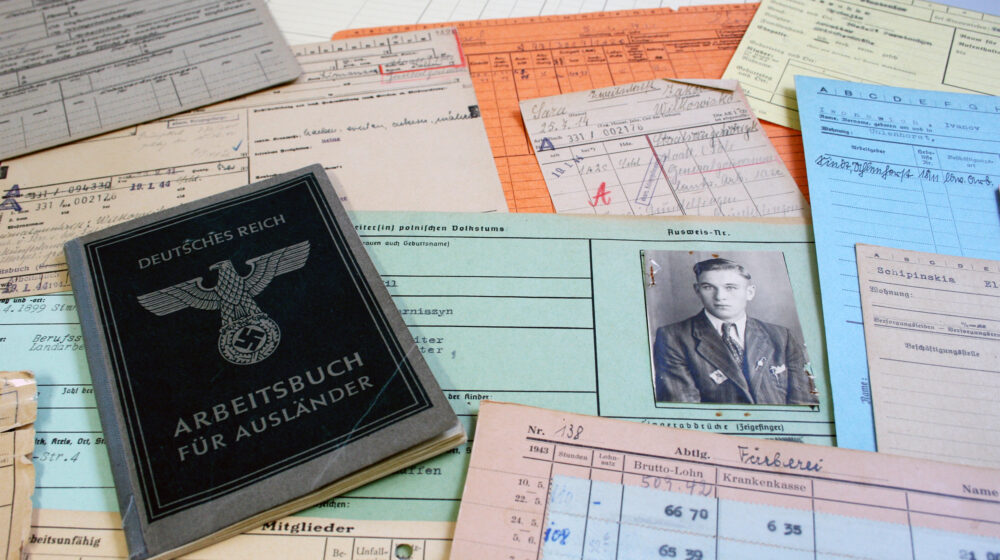 As of today, the e-Guide contains background information on the most common documents on civilian forced laborers. The descriptions of the historical documents –they include residents’ registration cards and index cards of the foreigner police, for example – are now available in German and English.

The e-Guide is a digital tool that contains explanatory information on documents issued for Nazi persecutees in order to make them easier to understand. The third and final part of the e-Guide has just come out; it provides clear and concise explanatory notes on the key documents concerned with civilian forced labor. Whom did the Nazi regime coerce into working for them, and what information do the registration documents contain? The e-Guide lets the documents “speak” and explains the system of forced labor and the way it was organized.

Deported to do forced labor

The largest group of forced laborers were the millions of civilian laborers from various European countries. In the early war years, some were still volunteering, as the German employment offices and recruitment commissions promised them better living and working conditions than in their native countries. When the number of people volunteering dwindled, the German occupiers turned to coercive measures and began deporting people to the German Reich to work. Most of the civilian forced laborers came from Poland and the Soviet Union. In August 1944 alone, there were 2.1 million Soviet and 1.6 million Polish civilian laborers in the German Reich.

The e-Guide was first published in 2018 and contained explanatory notes on the key document types related to concentration camp prisoners. It was later expanded to include descriptions of the cards and questionnaires that the Allies issued for Displaced Persons (DPs). The e-Guide was a huge project, and with the publication of the documents on civilian forced laborers, it is now largely complete. However, specific documents that are important for the work of the Arolsen Archives will still be added in future.

And there is another piece of good news: The e-Guide for concentration camp documents is now available in Polish as well as in English and German. Russian and French versions will follow soon. These translations will give millions of Nazi persecutees from Central Eastern Europe access to a wealth of helpful additional information in their native language.