A pocket watch serving as ambassador to Ukraine 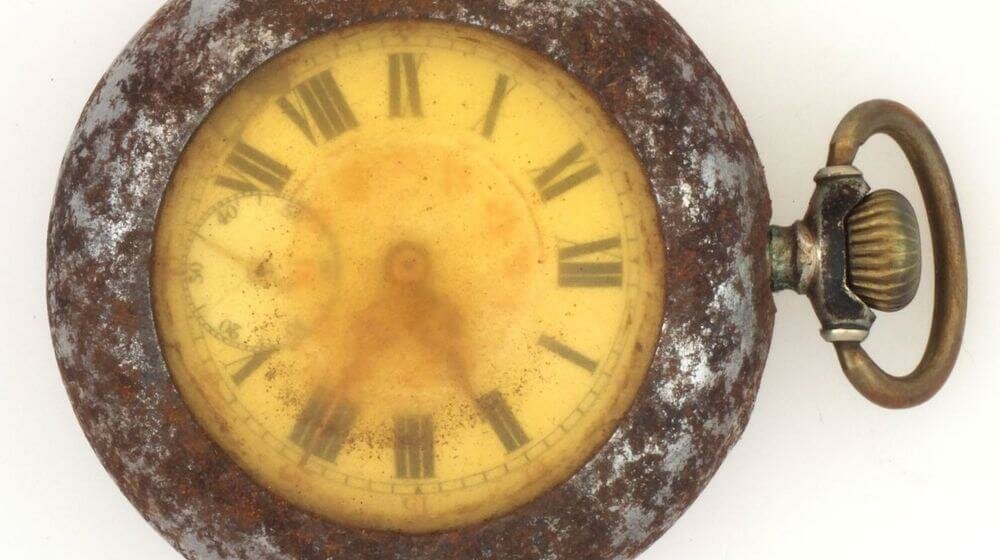 The Arolsen Archives are seeking new partners in Eastern Europe to help them reach out to more people in the region. Many are are unaware that the archive in Bad Arolsen holds information that families have been searching for for decades.

Mariia Ilkiv, who is volunteering at the Arolsen Archives with Action Reconciliation Service for Peace, came across Stefan Firsow’s pocket watch during her research. The documents in the archive contain little information on his fate. He was born on 25.12.1910, in a village near Lysychansk in Ukraine. On 26.5.1944, he was sent to the Dachau concentration camp as a prisoner-of-war, and on 22.10.1944, he was transferred to the Neuengamme concentration camp near Hamburg. This is the last we know of Stefan Firsow, but his “pocket watch with capsule” was recovered by the British Army after the liberation in 1945. It found its way to the archive in Bad Arolsen in the 1960s – in one of around 4,700 envelopes containing objects belonging to former concentration camp prisoners.

“Unsuccessful,” but to great effect!

Mariia Ilkiv began to search in Ukraine. She asked Lysychansk city council to help her find Stefan Firsow’s descendants. The staff there did everything they could to help; they studied civil registers and published appeals in local newspapers, on their website, and on Facebook. Other initiatives also joined the search, including the local veterans’ association and, last but not least, the Lysychansk Museum of Local History. Unfortunately, the search was unsuccessful. But the pocket watch has found a new home: the Lysychansk Museum of Local History expressed an interest in it and is now looking after the memento “as the last testimony of a concentration camp prisoner” and a reminder of the horrors of the Second World War.

This is how Stefan Firsow’s watch came to serve as the ambassador of the Arolsen Archives to Ukraine. Because we desperately need volunteers in Eastern Europe to help make the Arolsen Archives more widely known, so that the families of victims of Nazi persecution know who they can turn to.

An important part of our public relations work in Eastern Europe was a presentation given by the Arolsen Archives at an online press conference held in May 2020 by the Russian news agency TASS to mark the 75th anniversary of the end of the war. At the invitation of the International Committee of the Red Cross in Russia, Belarus, and Moldova, the Arolsen Archives used this opportunity to present the wide range of projects and research opportunities they provide for the Eastern European region. A quick evaluation of the inquiries we have received since then shows a very positive response: while the proportion of inquires submitted in Russian lay at around 10 percent before the press conference, it quickly rose to 33 percent afterwards!