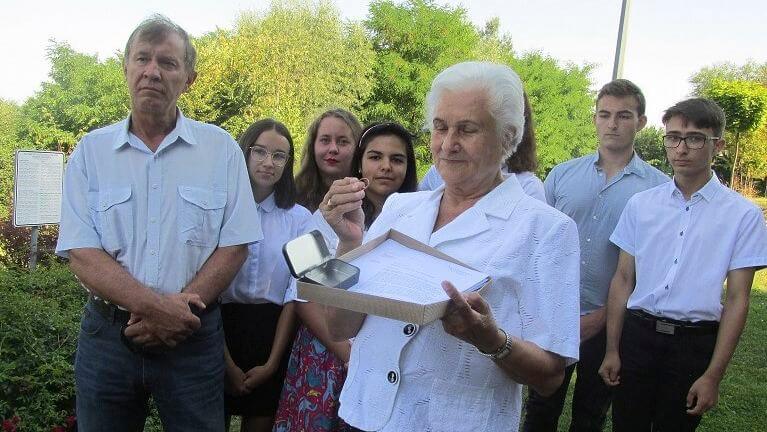 In mid-August, a group of enthusiastic pupils from the Polish town of Oświęcim/Auschwitz who are participating in the #StolenMemory project returned a memento to the descendants of another victim of Nazi persecution.

The young people managed to trace Stanisława Bury, the niece of former concentration camp inmate Stefan Baster, and then returned his wedding ring to her. The ongoing partnership between the Arolsen Archives and the International Youth Meeting Centre Oświęcim/Auschwitz (IJBS) made this possible.

The IJBS is currently working with six young volunteers to search for the traces of former prisoners and trace any living relatives they may have. The students from Konarski grammar school in Oświęcim/Auschwitz had already found descendants of Tadeusz Sieprawski in June. Now the young researchers were successful for the second time. They began to look into the history of concentration camp prisoner Stefan Baster, a railway worker and member of the resistance from the village of Nielepice near Krakow.

The wedding ring that has now been returned to the family has an inscription reading “Lola.” Stefan Baster married Karolina Biernat on March 3, 1943 and had his pet name for her engraved on the inside of the ring. The ring was returned to his niece Stanisława Bury along with information from the Arolsen Archives during a ceremony held in Nielepice. The students described meeting her as an emotional and unforgettable experience. They were also impressed by the local culture of remembrance, which ensures that detailed knowledge about people who were persecuted by the Nazis is kept very much alive. In accordance with the wishes of Stefan Baster’s descendants, the ring and the information that goes with it will be added to the collection of the Auschwitz-Birkenau State Museum.

Stefan Baster and his wife Karolina lived in a village called Rudawa. He was active in the resistance against Nazi Germany in Poland and came to the attention of the Secret State Police (Gestapo). After his arrest in late July 1943, he was subjected to brutal interrogations in a prison in Krakow. At the beginning of October 1943, the German occupying forces deported Stefan Baster to the Auschwitz concentration camp, where he was given prisoner number 152741. Later he was sent to the Neuengamme concentration camp in Hamburg, where he had to do forced labor.

The Polish resistance fighter probably died in an attack carried out on two ships in the Bay of Lübeck, the “Cap Arcona” and the “Thielbek.” Shortly before the end of the war, the National Socialists had crammed several thousand prisoners from the Neuengamme concentration camp onto the decommissioned steamers because it was clear that Allied troops would soon arrive. British bombers sank both ships in the mistaken belief that they were carrying German troops. The SS had destroyed all means of escape and all the rescue facilities on the ships beforehand.