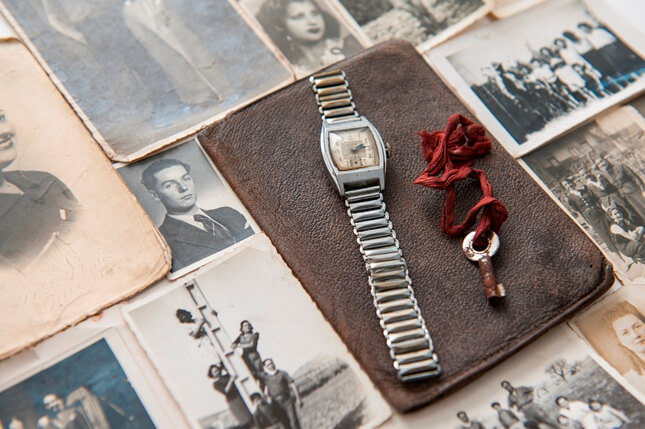 In the summer of 2018, Jean-Pierre Lopez was able to wind up his father’s watch again, a square timepiece with a silver link band and a white face. “It’s extraordinary,” he wrote to the ITS, “it seems to still work perfectly after 74 years.”

74 years – that’s how long it has been since the watch was taken from his father. Now it has been returned to the son by the ITS, along with photos and a key. It was a special moment, as he wrote: “I want to add that it was very emotional for me to open the package. To see my father’s personal belongings with my own eyes and to touch them with my own hands.”

His father, José Lopez, was arrested by the Gestapo in Gironde in 1944. At the time the young man was working for a timber company to save some money before getting married. The German occupiers accused the native Spaniard of having failed to perform his military service in Spain under Franco. “But my father was just two years old when he came to France,” his son explained, “and he had never really known his homeland.” José Lopez had been born in 1921 in Puigcerdà, near the French border in Spain. Shortly afterwards, he moved with his parents to France, where the family permanently settled in a mining town near Bessèges. The German police accused him of active anti-fascism and deported under this pretext.

Later in his life, José Lopez often talked about his arrest, deportation to Germany and imprisonment in Neuengamme concentration camp. “He spoke of the cruelty of the Nazis, the SS, the abuse in slavery,” his son remembers. He also described the hunger, intimidation and inhumane work. And how “saboteurs” – people who had unintentionally made mistakes – were hanged in the factory. As a deterrent. The Nazis had almost killed him in this way, too. “But wasn’t executed in the end,” his son says, “which was probably an oversight.” Nonetheless, the drudgery almost cost him his life. He was responsible for filling in bomb holes at the airport – even during aerial attacks. He had to collect the dead and take them to the crematorium, all the while ensuring that no one stole his meager daily ration of bread. In the end, he weighed just 40 kilograms and had typhoid fever.

“Despite this terribly painful experience, my father never hated the German people.” This is important to Jean-Pierre Lopez. “And he never instilled hatred in us either.” In his accounts, he always made a distinction between the regular Wehrmacht soldiers and the SS. It is very important to his son to raise his own children without aggression or prejudice.

Contact was established with Jean-Pierre Lopez through an exhibition in Salzgitter, in which personal effects – the possessions of former concentration camp prisoners – from the ITS archive were displayed. In the run-up, the curators had written to the mayor of the family’s place of residence so that Jean-Pierre Lopez could travel to the exhibition and get in touch with the ITS.

Through its #StolenMemory campaign, the ITS is seeking the relatives of former concentration camp prisoners to return the around 3,000 personal items still held in the archive.