Files transferred from Bathildisheim to ITS 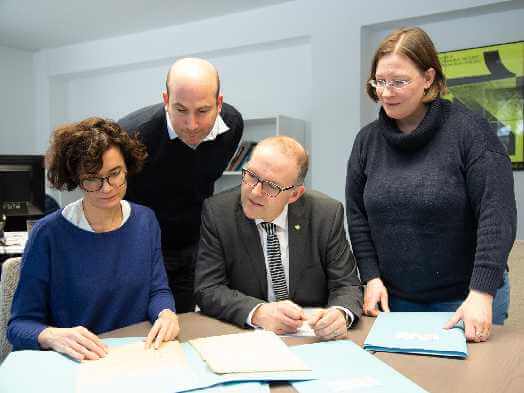 In the spring of 1940, the Nazis launched a special campaign to murder Jewish sanatoria patients. Five women living at the Bathildisheim home in Arolsen in Northern Hesse – some of them for many years already– were subsequently taken to the “Landesheil- und Pflegeanstalt” (state sanatorium) in Giessen. They never returned.

The Bathildisheim received information about only one of the women, Rosa Loeb: according to a letter of August 19, 1941, she had died of dysentery at the “Irrenanstalt Cholm” (Cholm insane asylum). The letter, however, is a forgery. The institution in Poland no longer existed at that point in time. The “Zentralstelle T4” (central department T4), which organized the murder of thousands of disabled persons, misused the address to send death certificates with invented causes of death to the families of the victims.

The Bathildisheim has now turned the files on the five women over to the ITS. “It’s important to us that the records be made accessible to the public and for research purposes,” explained director Jens Wehmeyer.

ITS director Floriane Azoulay commented: “For the families, it’s tremendously important to be able to fill in gaps and learn the truth about the fates of their dear ones.” Yet particularly small-scale archives have no means of publishing documents. Within the framework of the EU-funded EHRI program, the ITS offers support in such situations.