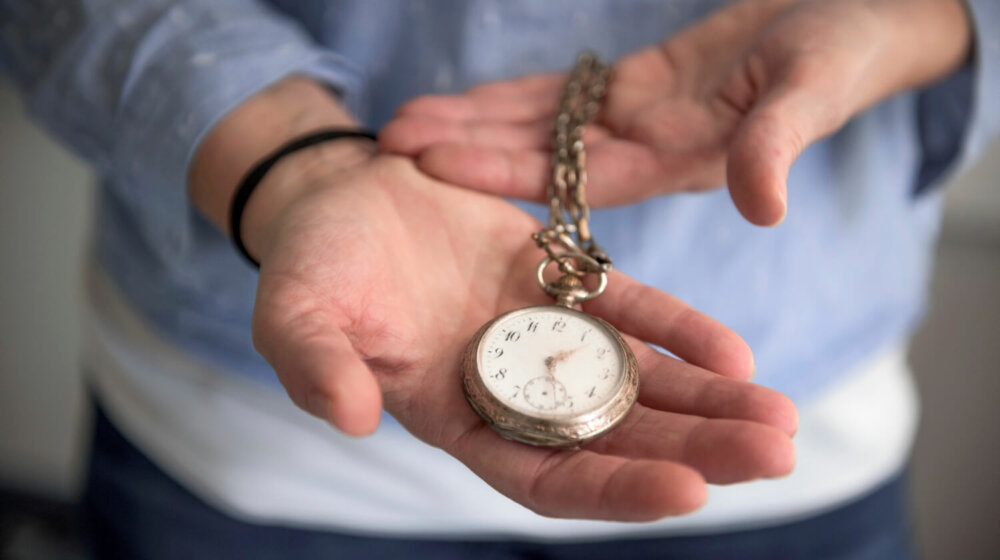 When the Arolsen Archives launched the #StolenMemory campaign back in 2016, no one realized how successful it would turn out to be: Four years on, and thanks to the active support of a whole host of volunteers, our tracing team has been able to return about 500 personal items belonging to former concentration camp prisoners to their rightful owners.

“I was speechless when I got the call,” remembers Anna Mazur. A group of young people from Poland who were working on a #StolenMemory project at the Youth Meeting Center in Auschwitz had managed to trace her and now wanted to return her great-uncle Tadeusz Sieprawski’s insurance booklet to her. It had been stored in the Arolsen Archives for many decades.

The National Socialists had deported the then 19-year-old to Auschwitz. Later, they transferred him to Neuengamme concentration camp. He died in 1945, shortly before the liberation. “The whole family waited for him. It’s as if he were coming home now.” It is very moving for the families when these objects are returned to them because they are often associated with memories, sometimes gaps in the family history can be filled in. On a few occasions, it has even been possible for items to be handed over to the survivors themselves.

In search of the rightful owners

In 1963, the personal belongings of over 4,500 concentration camp prisoners ended up in Arolsen, having taken a circuitous route to get there. The Arolsen Archives were charged with the task of returning the objects to their rightful owners. Although their efforts were crowned with success in many hundreds of cases, the numbers of families being found began to drop in the 1980s.

When they launched the #StolenMemory campaign in 2016, the Arolsen Archives invited volunteers to join in the search for the relatives of these concentration camp prisoners. The fact that there are now 500 stories to tell of objects that have been returned to their rightful owners shows that this idea was an important key key to success.

What volunteers contribute to the project

“The project triggered a wave of solidarity! We weren’t expecting anything like this,” explains Nathalie Letierce-Liebig, coordinator of the Tracing department at the Arolsen Archives. “Many volunteers from different countries have got in touch with us – often private individuals – and are tirelessly searching for relatives in their spare time.” They immerse themselves in historical documents, pore over registers of names, and study maps in order to reconstruct the life stories of people who were persecuted. The aim of the search is to unearth clues that will help us find out where the relatives now live in order to make contact with them. “Whenever our tracing team comes up against a brick wall – this might be because we are not in a position to conduct research at local level, for example – our volunteers step in and provide indispensable help,” says Nathalie Letierce-Liebig.

These objects provide a direct link to the individuals who suffered persecution. This is a very moving experience for many people, and it has sparked a lot of interest in our #StolenMemory exhibitions and educational projects:  The poster exhibition has been shown in many cities across Europe, including Paris, Barcelona, Athens, Krakow, and the European Parliament in Brussels. Thanks to funding provided by the Federal Government Commissioner for Culture and the Media, we have also been able to create a #StolenMemory traveling exhibition in a mobile shipping container. It has been touring through Germany since August 2020.

The #StolenMemory website is a complementary digital resource. Because the project has a strong appeal for young people, we have also developed educational materials for pedagogical work. We continue to place special emphasis on working together with partners in Poland, as over 900 of the items come from there .

There is still a long way to go

We have already achieved a great deal, but there is still a lot of work left to do. The personal effects of more than 2500 people are still waiting to be returned. We look forward to continuing to work with our volunteers, and we hope that support for the campaign will continue to grow.

Our thanks go to all those who have been helping us with this important work!

We know we won’t be able to return all the effects. But a number of museums and memorials have expressed an interest in taking on “hopeless” effects as loans in order to keep the memory of these men and women alive, many of whom sacrificed their lives in order to fight for freedom.

Nathalie Letierce-Liebig, coordinator of the Tracing department at the Arolsen Archives