Giving the Dead Their Names Back 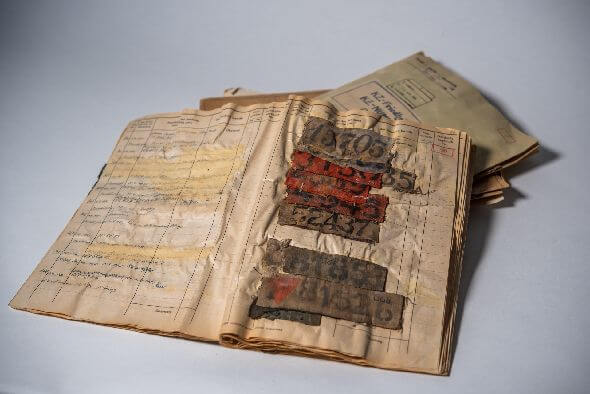 It was part and parcel of the Nazis’ policy to dehumanize their “opponents.” In the concentration camps, every inmate received a number that, from that moment forward, replaced his or her name. Three portfolios in the holdings of the ITS document an attempt undertaken by an investigative committee of the United Nations Relief and Rehabilitation Administration (UNRRA) in 1946/47 to give victims of the death marches from Flossenbürg their names back. According to the investigation report: “The real purpose for following this Death March was to identify the victims, rather than to count the graves or to indict the Nazis responsible for these mass murders.”1

Yet already just a year after the horrible events, the committee members found themselves confronted with witnesses who could no longer remember—or refused to let on if they did. “It will show that the lapse of time has dimmed the memories of the survivors, as well as having obliterated the markings of many graves. An ever increasing fear of the consequences and a desire to forget the horror of these atrocities have combined in the minds of many who witnessed this Death March.”2

Some 3,000–4,000 human beings perished on this march. “On the entire route from Flossenbürg to Untertraubenbach, everyone no longer able to walk was ruthlessly shot to death by the SS.”3 Others died of exhaustion. Some were buried in makeshift manner. Many simply lay in the fields. Usually all the dead had with them was their inmates’ clothing—bearing sewed-on inmate numbers that were the last remaining clues to their identities.

In 1946, the UNRRA appointed a committee to look into the death marches from Flossenbürg. The first such investigation, it was intended to serve as a model for inquiries into other death marches. The committee members interviewed eye witnesses and survivors and collected documentary evidence. What is more, six doctors—themselves former concentration camp inmates—examined nearly 600 exhumed corpses.

Before the dead were buried in a cemetery created for that purpose in Wetterfeld, their inmate numbers were cut from their clothing. The numbers were cleaned by a special method to make them legible again. Afterwards, they were painstakingly sorted into three portfolios according to grave number. The entries also include the cause of death: shot to death, beaten to death, suffocated …

The names of only a little over half of the dead were ascertained. The portfolios are a shocking testimony to the crimes committed during the death marches—in a context where all other traces have meanwhile been obliterated.

Sources in the ITS Digital Archive: