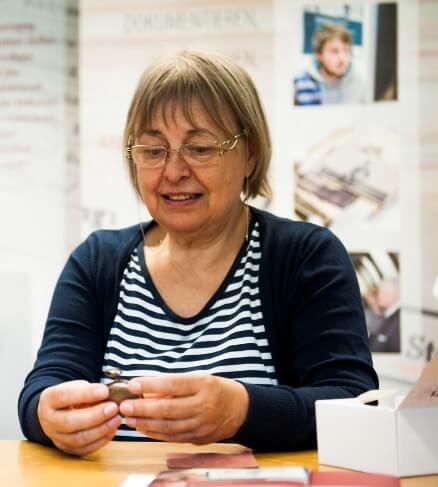 Max Wernicke was committed to the Neuengamme concentration camp as a so-called police inmate. After the bombing attacks on Hamburg in the summer of 1943 and new waves of arrests, there was no longer enough space in the city prisons.

The Gestapo began sending political prisoners to Neuengamme and other camps. “My grandfather was an awkward person, maybe that’s why he was arrested,” Christel Gottschalk told us when she came to the ITS at the end of June 2018 to retrieve his personal belongings: a pocket watch and a number of pension slips. Within the framework of the #StolenMemory campaign, an ITS team had carried out extensive research in various offices and archives and finally succeeded in locating Max’s granddaughter.

There are no records in the ITS archive about his time in prison. One document shows that the criminal police transferred him to the concentration camp near Hamburg on November 9, 1943. The camp administration initially assigned him the number 0329. All police inmates had numbers starting with 0. Because they had resisted the regime and were therefore presumably in danger of trying to escape, they were specially marked and never deployed for forced labor in external subcamps. After a time, however, Max and some of the other police inmates received regular inmate numbers. This was probably because of the ever-growing demand for forced laborers for the war industry. In Max’s case, the Nazis simply changed the grounds for detention” to “protective custody” / “professional criminal.”

The last indication of his fate is an entry in a list in the Neuengamme lab notebook. On April 10, 1944 he was diagnosed with tuberculosis. Whether he died of this illness, grueling forced labor and lack of proper care or was sent on a death march is not known. In the fifties his ex-wife tried to find out what had happened to him. His family had never heard from him again after his deportation.

At first, Christel wanted to have the watch sent to her. Then a friend of hers persuaded her to travel from her home near Hamburg to Bad Arolsen in person. She brought a photo of her grandfather with her. “He probably had his watch in his pocket when this picture was taken,” she mused as she looked at the mementoes. Several days later, she wrote us an e-mail: “It’s still so fascinating to me that, more than eighty years later, I’m holding something in my hands that belonged to my grandfather and was undoubtedly very important to him.”