Research-based learning in connection with visits to memorial sites: documentED 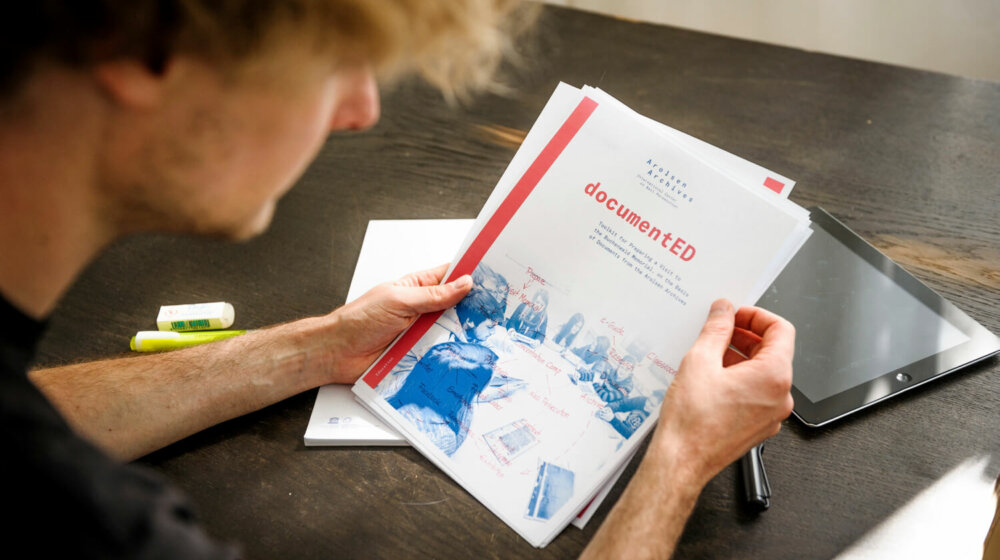 Christian Höschler and Margit Vogt from the Research and Education department at the Arolsen Archives first began working on documentED at the end of 2017. The aim of the project was to develop materials for teachers to use when preparing and following up on trips to memorial sites. In the following interview, they talk about how documentED came into being and about the important role authentic archival documents play in historical learning and contemporary forms of commemoration.

documentED facilitates preparation and follow up for visits to memorial sites. Where did the idea for the project come from?

Christian Höschler
The background to the project is that school classes often arrive quite unprepared when they visit concentration camp memorial sites. This state of affairs regularly attracts criticism both from the memorials themselves and from experts in history didactics. It makes things difficult for memorial sites, as their educational offerings frequently rely on students having a certain amount of prior knowledge.

Margit Vogt
And there is often insufficient follow up work after a visit. This is a real problem, because visiting a memorial is not something you just do in passing. Being confronted with a historical place of persecution affects students deeply, it leaves a mark, leaves them with impressions that need to be dealt with adequately if they are to learn from the experience without reacting defensively at an emotional level.

Christian
To put it another way, visits to memorials often take place in a didactic vacuum that needs to be filled. Nazi persecution is a complex topic and dealing with it appropriately requires a lot of preparation time. But a lack of time is a fundamental problem in schools. documentED grew out of our desire to help fill this gap by creating a module that provides preparation and follow-up for trips to memorial sites on the basis of documents from our archives. Another one of our aims was for teachers to be able to provide their students with didactically sound preparation and follow-up in 45-minutes, and we wanted to make it as easy as possible for them to achieve this.

And that’s where the toolkits come in?

Margit
Exactly. The toolkits are teaching materials that we create for various memorial sites. Not only do we provide didactic advice for teachers, we also include a selection of concentration camp documents from the Arolsen Archives that focus on individual victims of Nazi persecution. The toolkits also contain work assignments for the students and links to digital tools that help them work with the documents. And to round it all off, we also make suggestions for analog and digital remembrance projects that can be realized after a visit to a memorial. It is particularly important to us that students learn to apply a critical approach to perpetrator documents and understand that they reflect the comprehensive system of Nazi terror. But the kinds of documents we put in the toolkits (concentration camp registration documents that include personal details, for example) also give students the opportunity to take a closer look at the fates of specific individuals. Despite their bureaucratic nature, the documents provide an insight into the human dimension of Nazi persecution. Toolkits are available for a number of different places, including the concentration camp memorial sites in Auschwitz, Buchenwald, and Dachau.

Christian
The Arolsen Archives hold millions of documents on various different concentration camps and former prisoners. This puts us in a position to provide schools with customized toolkits on request by selecting documents on people who come from the same place as the students. This approach helps young people to relate the things they are learning about to the circumstances of their own lives. One of the fundamental challenges to be faced when teaching history is that it can seem very abstract. This can happen when bare facts are presented on their own in a textbook, for example. The fact that the National Socialists murdered millions of people is terrible, but students often struggle to understand what that really means. That’s why examining the fate of a specific individual is so important. Because it helps students come to the following realization: “This was a human life, a life that was destroyed.” When students go through this process of realization and understand what it really meant for individual victims and their families, they can begin to comprehend the full extent of Nazi persecution. And this is the foundation for a willingness to remember and a willingness to commemorate, both in the present and in the future.

You ran a test phase and tried out the toolkits in practice. How did students react?

Margit
The students involved felt that the toolkits prepared them very well for their visit to a memorial. While they were working with the documents, they formulated questions that they took with them when the time came. They sometimes found the visit itself quite overwhelming, but at the same time, they were able to draw energy from the experience, and they channeled that energy into the follow-up activities – partly as a way of coping with the visit both at an emotional and at an intellectual level.

Christian
Another reason for the predominantly positive feedback is that documentED promotes research-based learning with archival documents. Working with concentration camp documents has a unique authenticity. And we encourage students to use additional tools like our e-Guide to explore the documents for themselves. When students are given the opportunity to acquire knowledge by discovering it for themselves, they are often more motivated and more interested as a result – especially since applications like the e-Guide are much more in tune with the reality of students’ lives and with their digital consumption habits. I think the thing that students like about documentED is the fact that it combines close proximity to source materials and authenticity on the one hand with digital and interactive elements on the other.

All the careful preparations have now come to an end, and documentED will be launched in January. What are your plans for the future?

Christian
The toolkits will be available on the website of the Arolsen Archives where they can be downloaded free of charge. We aim to support as many visits to memorial sites as possible, especially once memorial sites can go back to operating normally again, so we will be advertising the project widely as well as contacting schools directly. And we would like to expand documentED even further in future: We are starting off with over 120 toolkits for trips to memorial sites in Germany, France, Austria, and Poland. The toolkits are already available in German, English, and Polish, and additional languages and toolkits for other memorial sites will follow.

To the toolkits
Support us