Medical files of Displaced Persons are being restored 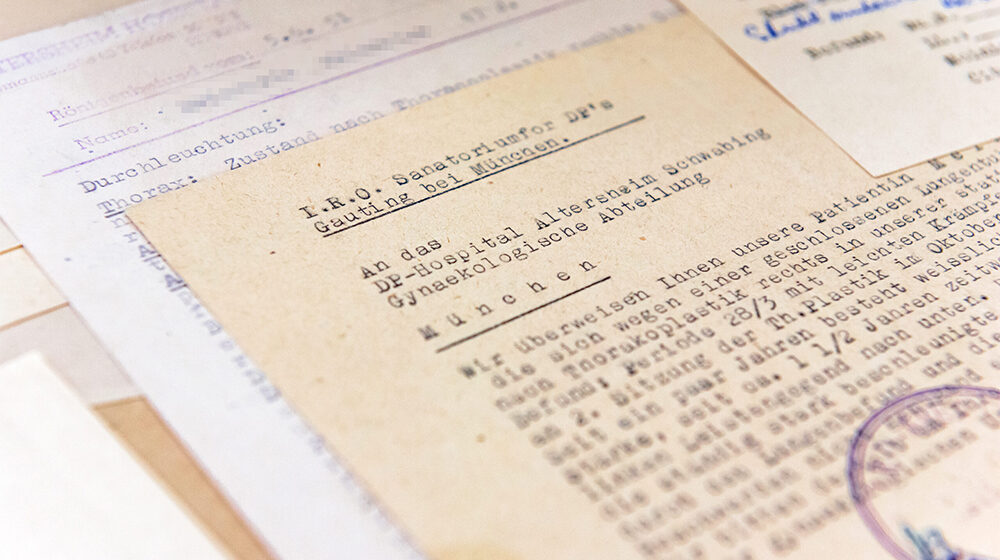 Thanks to a special program to preserve written cultural heritage run by the Federal Government Commissioner for Culture and the Media (BKM), the Arolsen Archives are able to have medical files of Displaced Persons (DPs) restored, thus safeguarding and digitizing them for future generations.

The medical files are the remaining documents from 17 DP hospitals, i.e. the hospitals in which the survivors from concentration camps and freed forced laborers were treated after 1945. They represent part of the patient records of Displaced Persons that had not been or could not be digitized up until now. The patient files contain medical histories, examination records, and X-rays.

The documents comprise a total of 21,934 envelopes contained in 475 boxes and weighing around 2,500 kilos. The medical files will be processed by the end of the year before being stored at the Arolsen Archives again and then also digitized.

Nicole Dominicus, Head of Archive Technology at the Arolsen Archives, is pleased that these documents are being restored: “Due to the significant damage to the paper, digitization has not been possible so far. To nevertheless safeguard the documents in the long term and allow for future use in digital form, the paper needs to be treated before digitization.”

Alongside preservation measures such as deacidification, the removal of metal and adhesives, and repairing tears, archive-appropriate repackaging for long-term archiving is a further important step to preserve the paper. These documents are some of the original documents held by the Arolsen Archives and are part of the UNESCO Memory of the World Programme.

Back in 2020, with the help of the KEK it was also possible to restore DP medical records which were digitized beforehand. Thanks to the new funding, the Arolsen Archives can now digitize many more documents.

The Coordination Office for the Preservation of the Written Cultural Heritage (KEK) was founded in August 2011 and is funded by the Federal Government Commissioner for Culture and the Media (BKM) and by all of the federal states via the Cultural Foundation of the German Federal States (Kulturstiftung der Länder, KSL). KEK supports projects throughout Germany relating to preserving original documents and actively promotes interdisciplinary collaboration between archives and libraries as well as the establishment of infrastructures to preserve records. The BKM special program is one of a total of two funding lines to preserve original documents. It primarily concerns large-scale measures, while the KEK model project funding line above all funds exemplary measures or flagship projects.