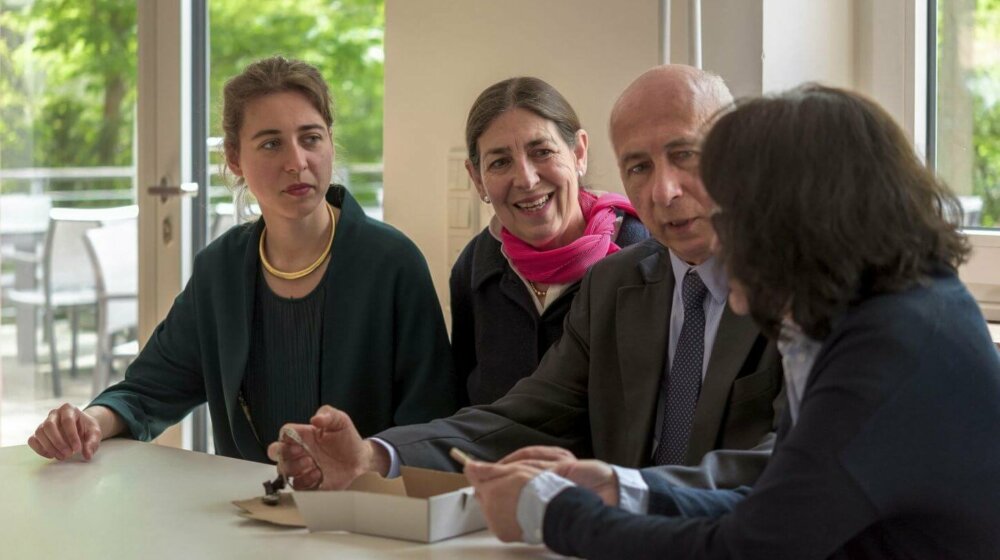 They were determined to celebrate Christmas in the concentration camp: Geneviève Helmer and her friends – young women from all over Europe who had been categorized as political prisoners – had to improvise for the celebration on Christmas Eve in 1944. Geneviève’s son, Benoît Weymuller, visited the Arolsen Archives to retrieve her personal effects and share his mother’s vivid memories of her imprisonment.

Through a series of small thefts, the prisoners managed to cobble together Christmas decorations from modest means in the Hannover-Limmer labor camp. Their Christmas cake consisted of bread and the infamous “camp coffee,” an undrinkable infusion of coffee substitute. “My mother drew this stork on a piece of cardboard,” Benoît Weymuller says, showing a photo of Geneviève’s Christmas decorations from the camp. He has a whole folder of documents, pictures of his mother, her eyewitness testimony and letters.

He visited the Arolsen Archives together with his wife and daughter to retrieve the personal effects that had been stored in the archive for decades: a watch, a bracelet and a powder compact. Employees of the Arolsen Archives tracked down Benoît Weymuller through the #StolenMemory campaign. Unfortunately, Geneviève had just died a few months earlier at the age of 97. 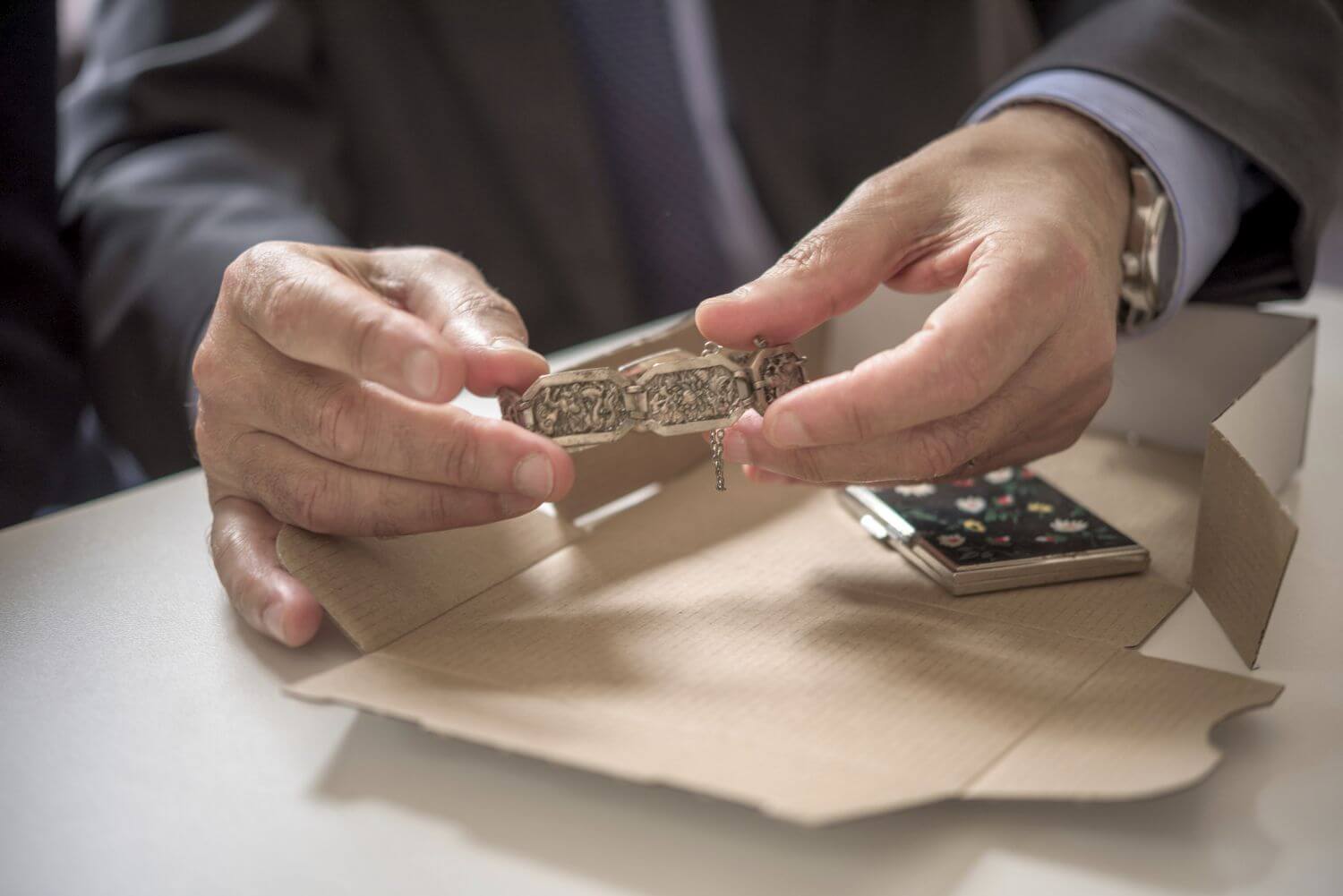 »It’s such a shame that my mother just missed having her belongings returned. It would have especially moved her to have this bracelet again. She was very attached to it, as it was a present from her godfather.«

When the family took a closer look at Geneviève’s powder compact during their visit, another mystery was solved: it was stamped with “Made in Austria.” This is obviously why the owner of the compact was registered as an Austrian after the war. This misattribution made it more difficult to trace Geneviève Helmer. The powder compact might have been a gift from one of her friends, the Austrian woman Elisabeth Charlotte Zeißl. The two women had been students at the French University of Strasbourg, which had been relocated to Clermont-Ferrand during the war, and they were members of a resistance movement against the Nazis. During a raid at the university on November 25, 1943, the Gestapo arrested them with over 1,000 other students and professors. 300 were deported.

After weeks of interrogations, military prison and internment camps, both women were deported to the Ravensbrück women’s concentration camp at the end of January 1944. They arrived on one of the mass transports from France. The SS had crammed more than 1,000 women from the Compiègne internment and transit camp in northern France into cattle cars. Their tortuous journey lasted three days – three days without water or food. The Arolsen Archives also have documents and information about other women on this transport, such as the Spanish resistance fighter Braulia Cánovas Mulero.

Benoît Weymuller’s papers even include a letter that his mother threw from the train and which was forwarded to her parents by a railway worker. Despite the inhumane conditions on the transport, she tried to console her family and elderly parents in this message: “Excellent health, good morale. There is no reason to worry about me. We are a small group of very friendly people.”

Christmas party despite forced labor in the concentration camp

After five months in Ravensbrück, Geneviève was transferred with nearly 200 other women to the Hannover-Limmer satellite camp. At the end of 1944, over 1,000 women had to carry out forced labor there for the tire manufacturer Continental. They were expected to produce large numbers of gas masks, doing piecework for 12 hours at a time in day or night shifts. The women in Block 12, where Geneviève was housed, tried to bring a little “comfort and joy” into their lives and secretly organized a celebration on Christmas Eve. They also exchanged imaginary presents. The women wanted to eventually give each other real presents – assuming they survived. A Spanish woman named Pilar Lubian was going to give Geneviève Helmer a comb and a veil.

Most of the women, including Geneviève, were sent by the SS on a death march to Bergen-Belsen in early April 1945. Geneviève survived and was liberated on April 15. Pilar also survived her imprisonment, and Geneviève tried to meet with her after the war. Her son doesn‘t think they were ever able to see each other again. But amongst his mother’s documents, he found an address for Pilar in Spain. With this clue, the Arolsen Archives have now set out in search of her relatives – since the archive also holds a ring belonging to Pilar that she was forced to hand over when she was arrested.