Memory of the World on Tour 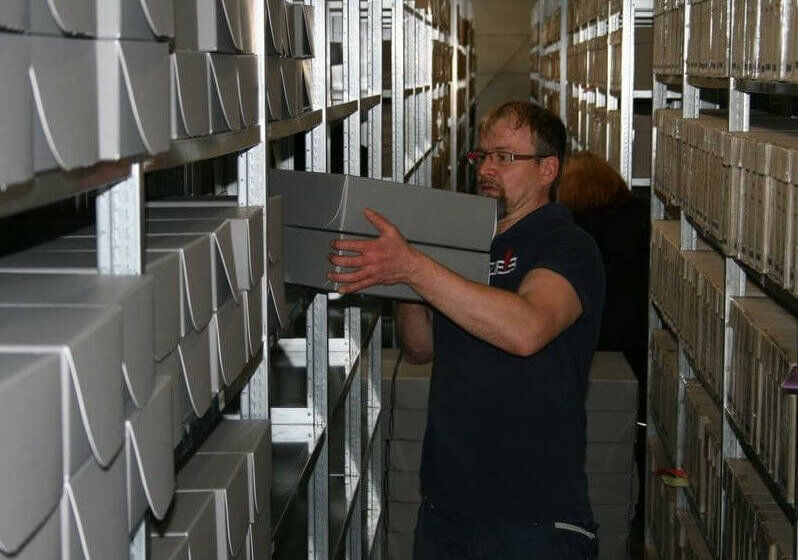 Anyone passing an inconspicuous white truck on the highway last week on Monday would never have guessed that it was carrying part of the UNESCO Memory of the World. The 301,000 documents were on their way back to the International Tracing Service (ITS) archive after being deacidified and restored at the Zentrum für Bucherhaltung (center for book preservation) in Leipzig.

The grey crates that came back to Bad Arolsen from Leipzig by the palette contained the so-called CM/1 files from Austria. The abbreviation CM stands for “care and maintenance”. To apply for support from the International Refugee Organization (IRO) between 1947 and 1952, former victims of Nazi persecution filled out CM/1 forms. These questionnaires, which are accompanied by photos, contain accounts of persecution from the point of view of the survivors as well as descriptions of their plans for the future. This makes them unique testimonies to Nazi persecution dating from the immediate post-war era.

For years, the paper had been subjected to a lot of wear and tear. That’s because, until their digitization, the documents served the ITS team as an aid in the daily search efforts. What’s more, over time the acid in old paper leads to its decay. As a result, the maintenance of the holdings is one of the ITS’s ongoing responsibilities. The “deacidification” project got underway in the year 2000. Six million documents have meanwhile undergone conservation.

The process of deacidifying and restoring the CM/1 files from Austria took three months. Now the 2.8 tons of paper are back in the archive in special acid-free boxes where they’ll be preserved for generations to come.