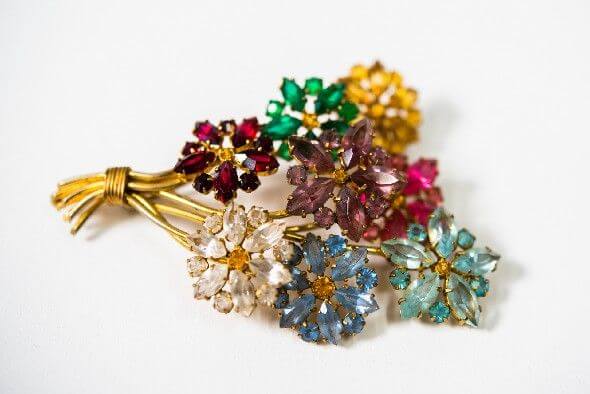 Irène Rossel headed a resistance group against the German Nazi occupiers in France. In 1943, the Gestapo arrested her and the writer and insurgent Jorge Semprún. After undergoing torture and imprisonment in several concentration camps, she died shortly after her liberation in Bergen-Belsen. The ITS still has in its holdings the brooch taken from her by the Nazis in the camp. It will now enter a museum collection.

Irène Rossel was one of the few women who formed resistance groups in France and actively fought against the German Nazi occupiers. She was born Irène Chiot in 1898. She became a social worker and, after a brief marriage, kept the surname Rossel. A woman known as energetic, resolute and independent, she was already involved in establishing a network of insurgents in Toulouse in 1940. Two years later, along with her mother and cousins, she founded a resistance group in Joigny in the Yonne département.

She helped prisoners of war escape, obtained weapons and cultivated contacts with other groups. In 1943, one of the group’s detachments blew up several cars of a German train. The next day, the Gestapo raided the group’s headquarters. They surprised Irène Rossel and the writer and insurgent Jorge Semprún in their sleep. He was living there as well at the time, and would later describe his arrest and deportation in his book The Long Voyage.

After her imprisonment and severe torture, Irène Rossel was deported to various concentration camps, including Neuengamme. It was presumably a death march that took her to Bergen-Belsen towards the end of the war. There the inmates were left to their own devices without food, medical care or any means of maintaining hygiene. Jorge Semprún and the former prime minister of France Léon Blum took a stand for Rossel’s rapid repatriation, as ITS documents show. However, just a few weeks after her liberation, she died—sick and completely enfeebled—in Bergen-Belsen.

Within the framework of its #StolenMemory campaign, the ITS managed to find Rossel’s second cousin twice removed. The tracing service had undertaken the search because of a gold brooch with colored gemstone blossoms that the Nazis had taken from her in the concentration camp. It is the wish of this relative that the brooch be given to the Joigny Museum of the Résistance. The museum also plans to host the exhibition on the #StolenMemory campaign and initiate research on other members of the resistance.