“My father survived but had stopped living his life” 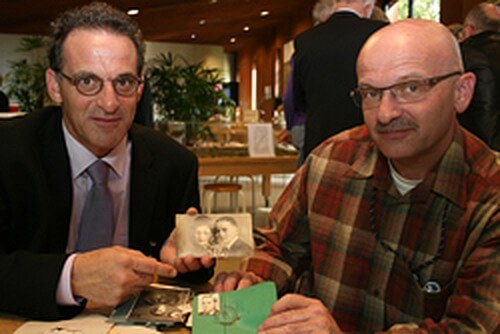 “Many emotions have been stirred up inside me,” said Arnold van Dam. “It is very moving to hold my father´s personal possessions in my hands. ”Sixty-five years after the end of the Second World War, the International Tracing Service (ITS) in Bad Arolsen returned a wallet to the Dutchman yesterday containing photographs, letters and papers which had belonged to his father. The Nazis confiscated it from Nathan van Dam upon his arrival at the concentration camp Neuengamme.

The presentation took place during an event at the Amersfoort memorial, which was attended by 14 Dutch families. Arnold van Dam came with his brother Marcel, who brought his two children. “The wallet brought back memories. It opened me to my father´s history,” said Arnold. Nathan lived in Rotterdam with his first wife until the Gestapo arrested the Jewish family in early 1943 and incarcerated them in the police prison in Scheveningen. On October 9, 1943, Nathan was transferred to the police transit camp in Amersfoort and registered under prisoner number 2795. Exactly one year later the Nazis transported him to the concentration camp Neuengamme, near Hamburg. His wife was murdered in Sobibor. Nathan also lost many other family members.

“My father survived, but had stopped living his life,” said his son. “He suffered from fear of commitment and married two more times. He was overpowered by the fear of once again losing someone he loved. His relationship to his sons was also superficial.” Nevertheless, Arnold knew his father as a strong person. “He told me that he wanted to pull through,” said the 51-year old. “During his imprisonment he always gave different names and birthdates.” He was intensively occupied with the Nazi persecution until his death in 1988. “He kept countless books and war reports on that terrible time. He also regularly attended annual commemoration events in Amersfoort,” reports Arnold. “But he could barely talk about it with us.”

In Amersfoort, both of Nathan´s sons and his two granddaughters looked through the contents of the yellowed wallet with interest and tried to identify the people in the photos. The family also studied documents from the ITS archive. “I didn´t know my grandfather,” said 16-year old Martine. “It is something special for me to be here today as I am very interested in his story.”

Gert van Dompseler and Pieter Dekker of the October ’44 Foundation were able to make contact with the family. Both Dutchmen have been doing volunteer research on family members for months. In addition to the presentation of the wallet there was also a tour of the memorial site. “Most of what we have heard and seen today is new,” said Arnold. “You have made me happy.”