“My uncle was very important to me” 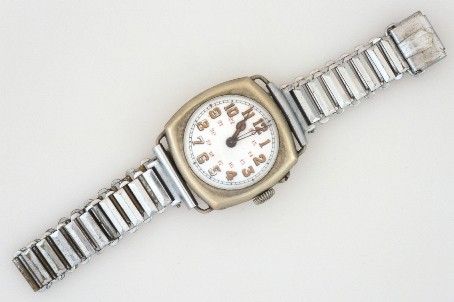 It took Marcelle Boulhol completely by surprise when a member of the International Tracing Service (ITS) staff contacted her and told her about the personal belongings of her uncle in the archive. Until then, she had known next to nothing about his fate. She received the package with Antoine Brun’s watch and pen in November 2017. “My uncle was very important to me,” explained the Frenchwoman, a local politician, in her reply to the ITS. “Even though I never knew him – but on my mother’s account. She cried for her brother all her life.”

The Nazis had deported the Frenchman—who came from Rive de Gier in the Auvergne-Rhône-Alpes region—to Zschopau to perform forced labor for the Auto-Union. The Chemnitz Gestapo arrested him on August 27, 1944 for unknown reasons; his deportation to the Neuengamme concentration camp as a political prisoner followed three months later. He was assigned the inmate number 66643. His death certificate, which is on file in the ITS archive, provides information about where he was compelled to spend his final weeks and when he died. The Nazis had transferred the mechanic to the Bremen-Schützenhof subcamp, where inmates had to manufacture submarine parts and build a submarine pen. They were also put to work clearing rubble in the urban area of Bremen. Apart from Hungarian Jews, the inmate population at Schützenhof was made up primarily of political inmates from Belgium, France, Poland and the Soviet Union.

Antoine Brun died on February 22, 1945 at the age of thirty-six, murdered by grueling forced labor and inhumane living conditions. His ashes were initially buried at the Riensberg Cemetery in Bremen. In 1956, they were transferred to an honorary grave for victims of Nazi persecution at the Osterholz Cemetery.

Within the framework of the #StolenMemory campaign, the ITS has redoubled its efforts to find relatives of Nazi victims whose personal possessions are still in its archive. The aim is to return as many of these important mementoes to the families as possible.

The search for Antoine Brun’s relatives was soon successful, thanks to the fact that his family had remained in Rive de Gier. The ITS learned from the local residents’ registration office there that Antoine’s wife and sister had died, but a nephew and a niece could be located. He had no children of his own. That’s how the contact to Marcelle Boulhol came about. She is a member of the Fédération nationale des déportés et internés résistants et patriotes (FNDIRP) and active in efforts to remember the Nazi crimes. “The wounds are still there; that cruel era left its marks,” she stressed. It means a lot to her to know more about Antoine and be able to keep his personal belongings for later generations.