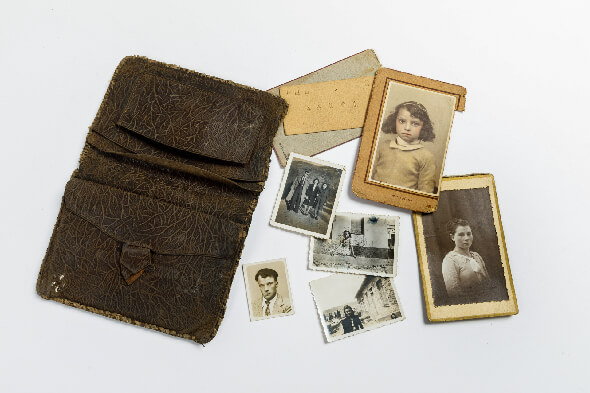 All of the family’s inquiries about the whereabouts of Miquel Obradors Mas during World War II had come to naught. In the summer of 2018, however, the ITS succeeded in turning his personal belongings over to his three granddaughters.

They had long given up hope of ever hearing anything about their grandfather again. Then they received his wallet, full of family photos. And more than twenty years after their last research endeavors, the granddaughters now also finally learned why so few traces of him were to be found in the archives. Their grandfather was on file under a different name and with a different place of birth.

“We didn’t get to ask or talk about this matter in the family,” explains Montse Blanco. “My mother and my grandmother died when we were little girls. And no other members of the family, especially his niece—who received the letters from France—, had more information either.” Miquel Obradors Mas was born in Navàs, Spain on September 13, 1900. He became a bricklayer, married and had one daughter. In several of the photos in the wallet, his daughter Margarida as well as his niece and some friends are portrayed.

Like several hundreds of thousands of Spaniards, Miquel left his homeland and went into exile for political reasons. He presumably went to France in 1939, when the Spanish Civil War came to an end. Between then and 1943, he sent several letters to his niece; after that, there was no further trace of him for a very long time. When the family didn’t hear anything from him, they sent a letter to the municipal administration of the town where he had last lived. Miquel had evidently left the city in 1944 to join the French Resistance. All further research was in vain.

Between 1993 and 1996, his three granddaughters made another attempt. “The results were negative, so after that we stopped searching,” Montse remembers. The information in his letters already indicated it, but it wasn’t until 2018 that it turned out to be true—his name had been slightly changed. Irma Bousquet of the Amicale de Neuengamme et de ses Kommandos inmates’ association helped the ITS with its research and found Miquel’s family.

The records reveal that he was in the police prison in Compiègne and in the convoy that left Compiègne on July 15, 1944. The National Socialists deported him to Germany, and on July 18, 1944 the Neuengamme concentration camp security service registered him as a “political inmate.” That was something his relatives hadn’t known before: “My family was never informed about the fact that my grandfather was deported to the Neuengamme camp. He had disappeared without a trace in France,” Montse wrote. “I thank the ITS for its interest in the research, and I appreciate its work.”