Original Files Preserved for the Future 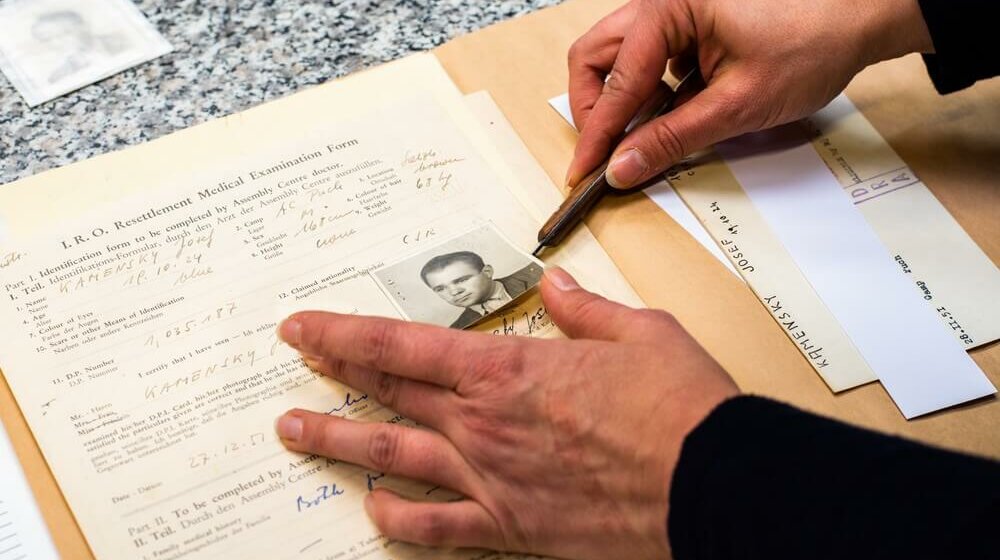 Until their digitization, the files pertaining to displaced persons were completely ordinary working materials, and as such subject to a lot of wear and tear. ITS staff members unpacked, leafed through and made copies of them, then repacked them for further safekeeping. With the aid of a specialized company, the ITS has now deacidified and restored the documents to preserve them as part of the UNESCO’s Memory of the World.

The Zentrum für Bucherhaltung in Leipzig had less than three months to deacidify the 301,000 documents and carry out the most urgent restoration measures. The actual deacidification, a mass procedure, is routine. The chemical pre- and post-processes, however, were somewhat complicated in the case of these so-called CM/1 files. The abbreviation stands for “Care and Maintenance,” a category consisting primarily of applications for financial assistance, submitted along with photos by former victims of Nazi persecution between 1947 and 1952. The applications are in envelopes, which are likewise being preserved.

To speed up the process and ensure that nothing would be overlooked, the conservators began by cutting the envelopes open on both ends. Then they removed the photos from the documents: glued-on pictures with a knife, riveted ones with a little striking tool. “If you deacidify photos, you run the risk of dissolving the surface coating,” Nicole Dominicus, the head of ITS archive administration, points out.

Owing to the fact that the envelopes’ contents used to be taken out, leafed through and put back in, many of the documents exhibit tears and creases. “For decades, these files were what we had to work with,” Dominicus explains. The Zentrum für Bucherhaltung repaired major tears and flaws to keep them from tearing further. For deacidification, the 2.8 tons of documents were put in wire baskets. Then they were dipped into a chemical solution that neutralizes acids, thus retarding the paper’s decay. During the drying process, the specialists smoothened the paper and removed creases.

For the ITS, the preservation of its holdings is a never-ending responsibility. Since the year 2000, it’s had six million documents deacidified. For the current treatment of the CM/1 files from Austrian DP camps, the tracing service once again profited from a special government program for the preservation of written cultural heritage, and thus from addition federal funding. The CM/1 files from Germany already underwent deacidification two years ago. “These records are particularly interesting because of the photos, the information the DPs provided on their relatives, and the documents pertaining to children,” Dominicus comments. In order to set the right priorities in its restoration efforts, the ITS has just updated its damage register. “After all, the optimum preservation of our UNESCO Memory of the World is an important ongoing task,” Dominicus sums up.