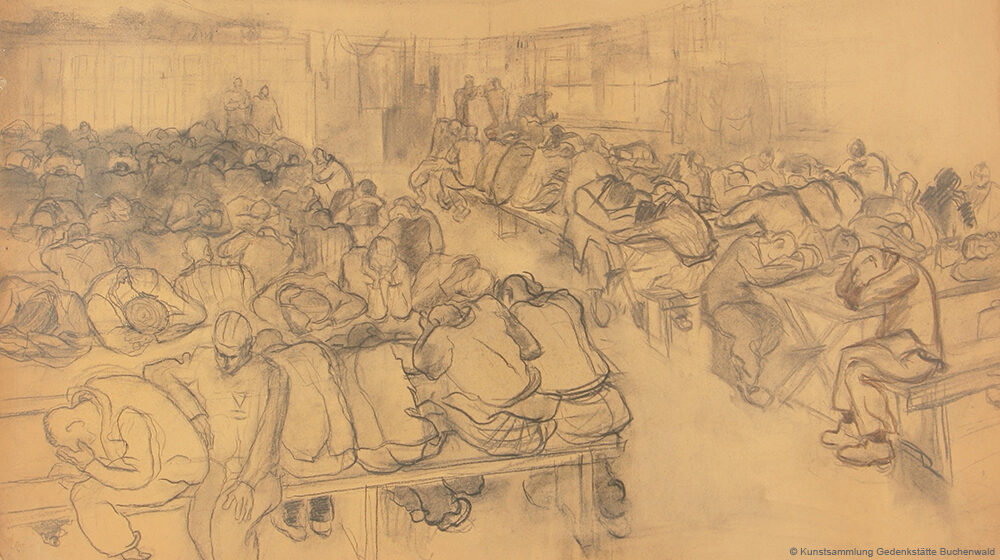 He designed not only scenery for the theater stage, but also demonstration placards for the Communist Party. This would be the French graphic designer and set designer Paul Goyard’s downfall: The Nazis arrested him in Paris and transported him to Buchenwald concentration camp in May 1944, where he survived until liberation. During his imprisonment, Paul produced around 300 artistic drawings, which are now among the rare preserved original documents from everyday concentration camp life.

Paul Goyard was born in Digoin, France, on December 28, 1886. In 1919, he worked in a workshop that produced theatrical scenery in Brussels. A short time later, he opened his own workshop for set designers in Paris, providing scenery, for instance, for premieres at the modern Théâtre de l’Œuvre. However, he also designed placards for demonstrations by the Communist Party and became a member of the Resistance after the Nazis occupied Paris. This led to Paul being arrested in 1942 and sent to the Buchenwald concentration camp on May 14, 1944 from the Compiègne internment camp. His detention category in Buchenwald was “Political Frenchman”.

Survival as an artist collective

Paul remained at Buchenwald until liberation in April 1945 and survived with the help of a group of French and Belgian artists and intellectuals. They protected each other and enabled each other to work creatively with all manner of tricks. During the one year that he was imprisoned, Paul thus produced 300 pencil drawings on wastepaper, showing the specific living situation in the camp: the accommodation in barracks and tents, the crematorium, the roll call square, the emaciated people and the dead.

Paul Goyard in the online archive

After the war, Paul discovered that his workshop in Paris had been destroyed. He never worked as a set designer again. However, together with painter and former fellow inmate José Fosty, he created a diorama (a display with model figures and scenes) of Buchenwald concentration camp based on his drawings. This work of art was displayed at touring exhibitions, but has now unfortunately been lost. Paul’s sketches of the camp were forgotten and, after his death on March 1, 1980, passed into the possession of José Fosty, who handed them over to the Buchenwald Memorial in 1998. In 2002, the Buchenwald and Mittelbau-Dora Memorials Foundation published 100 of the drawings with a first-hand account by José Fosty and bibliographic documents.