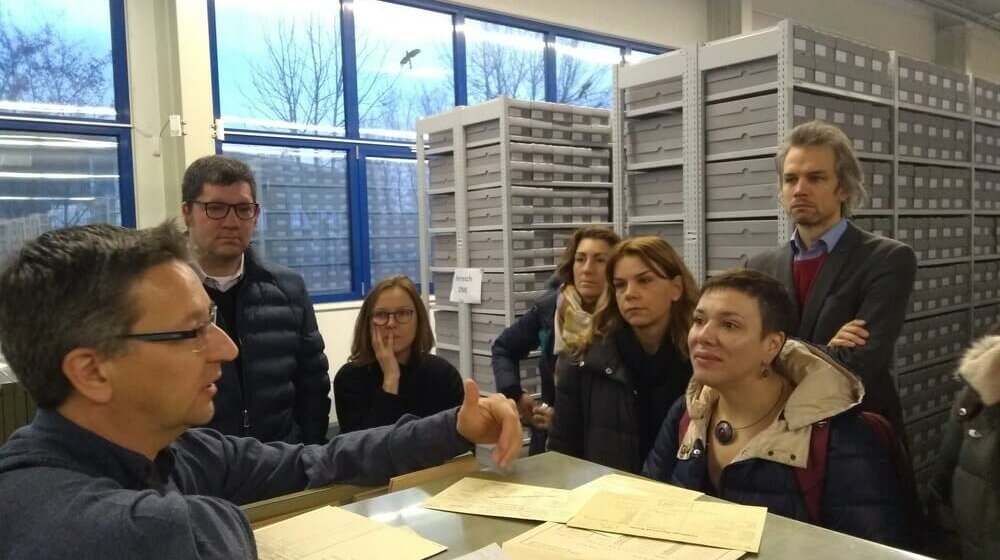 At the EHRI workshop “Person-Related Records Beyond the Personal,” which took place at the ITS in Bad Arolsen on November 19 and 20, 2018, sixteen historians and archivists from eleven countries discussed the opportunities offered by—and limitations to–the evaluation of personal documents in research on the Holocaust.

Christian Groh, the head of the ITS archive, summed up the workshop by pointing out that, “in addition to participants from major institutions such as Yad Vashem, the United States Holocaust Memorial Museum (USHMM) and the Mémorial de la Shoah, colleagues from smaller organizations, for example the Kitchener Camp Project, as well as researchers attended. As a result, the contributions covered a tremendous range of perspectives, which was very enriching.”

Adina Babes from the Elie Wiesel National Institute in Bucharest was delighted to receive impulses for her research work: “Now I have new ideas for how to go about searching for personal fates in various document types.”

Digitization is making it possible to interlink large amounts of documents on the Holocaust from all over the world and evaluate them according to various criteria. One of the European Holocaust Research Infrastructure (EHRI) project’s goals is to create the digital infrastructure for this purpose.

“In view of the large quantities of data that can be evaluated and processed by means of digital networking, we must be careful not to lose sight of the fact that even just a little piece of paper might be the last trace a person left behind. What’s more, there are a lot of gaps we’ll never be able to fill,” Ron Coleman from the USHMM emphasized. And he added: “The documents are also a monument to the victims. We mustn’t forget that.”