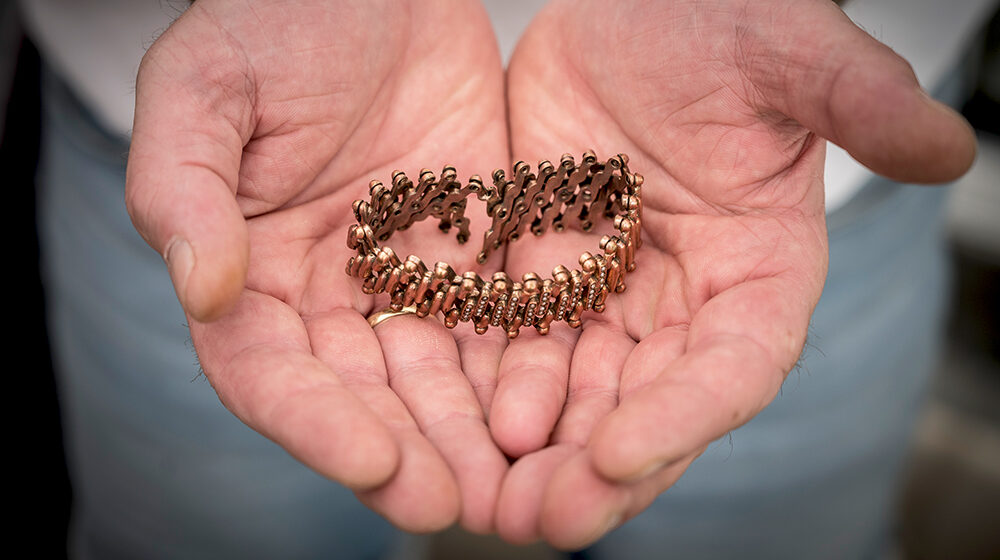 The Nazis confiscated Johann Franz’s bracelet when they took him to the Auschwitz concentration camp in 1941. After years of searching, the Arolsen Archives have now managed to find one of his great-grandsons. The bracelet was returned to him the day before European Holocaust Memorial Day for Sinti and Roma. The Nazis murdered over 500,000 Sinti and Roma from all over Europe, including Johann Franz’s wife and seven of his children.

For Thomas Franz it was a huge surprise to find out that a personal object belonging to his family had survived from the time before their persecution. “It’s a good feeling, and it’s very moving for me now to be able to hold something in my hands that meant something to my great-grandfather, something he owned before he was imprisoned in a concentration camp. We don’t have anything else from back then. The Nazis took everything away from my family.” Six of Johann’s children were murdered along with their mother in the “Gypsy family camp” at the Auschwitz concentration camp; one of his sons is presumed to have died in the Mittelbau-Dora concentration camp. Johann Franz and two of his children were the only members of the family to survive.

“Being able to return this item in the town of Brake is a very special event: we hardly have any objects belonging to Sinti and Roma victims of persecution in our archives,” explains Floriane Azoulay, the Director of the Arolsen Archives. “They were deported to the extermination camps in occupied Poland and Belarus, most of them were murdered there, and their property was disposed of.” Johann Franz’s bracelet was preserved because he was transported from Auschwitz concentration camp to Neuengamme concentration camp in March 1943 to work as a forced laborer. The Nazis sent prisoners’ personal belongings along with them on this type of transport. These so-called effects from Neuengamme concentration camp were recovered by the British Army after the camp was liberated, and they ended up in the Arolsen Archives decades later.

Information about the family’s fate

As well as receiving the bracelet, Johann’s great-grandson Thomas Franz also received information about his forebears, because the documents stored in the Arolsen Archives contain various details about the family’s fate. This means a lot to him: “We knew that the whole family was in the concentration camp. My grandfather Oskar survived, but he spoke very little about his time in the camp. We didn’t know any of the details. It was probably all too painful.”

Johann Franz was born in 1908 in Bromberg (today: Bydgoszcz) in West Prussia. In the 1920s and 30s, he lived with his wife Ida and worked as a showman and performer in East Prussia. The Nazis arrested Johann first, the father of the family, and on September 1, 1941, they deported him to the Auschwitz concentration and extermination camp, where the SS gave him the prisoner number 20 338. Documents in the Arolsen Archives also show that the National Socialists deported the three oldest Franz siblings to other concentration camps for forced labor in 1944: two brothers, Josef and Oskar, were sent to Buchenwald, their sister Frieda was sent to Ravensbrück. The last reference we can find to Josef is in a document from Mittelbau-Dora concentration camp that dates back to early 1945.

Only Johann, Oskar, and Frieda Franz survived the persecution. They settled in northern Germany after they were liberated, and they spent long years fighting in vain for compensation after the war. For many decades, the newly established Federal Republic of Germany refused to recognize persecuted Sinti and Roma as victims of National Socialism and denied them compensation. In 2022, after lengthy research, a reference in documents connected with these compensation proceedings enabled an employee of the Arolsen Archives to trace the descendants of Johann and Oskar Franz to the German town of Brake.

The Arolsen Archives have a special collection of personal items that includes watches, wedding rings, and family photos. These so-called effects were confiscated by the Nazis when they imprisoned people in concentration camps. The Arolsen Archives Center on Nazi Persecution works with volunteers who help search for the victims’ families so that these stolen items can be returned. Since 2016, the Arolsen Archives have managed to find 640 families through the #StolenMemory campaign.

Press photo: Bracelet from the property of Johann Franz

Press photo: Conversation with the descendants of Johann Franz