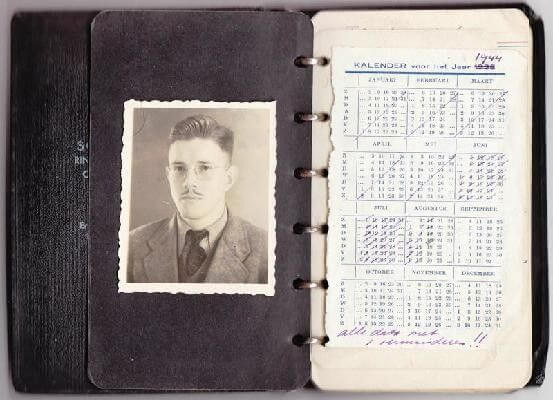 On 18 August 1944, 21-year-old Rudy de Wijs was arrested in the Dutch city of Arnheim and deported to Neuengamme Concentration Camp, where he died only a few months later as a result of the inhuman conditions there. Among the personal belongings the young man was carrying with him when he was arrested was his notebook. The International Tracing Service (ITS) was able to return this book to Rudy’s family in October 2015. It offers a look into Rudy’s life, his hopes, and his thoughts immediately following his arrest.

For decades Rudy de Wijs‘ family never knew exactly what had happened on that day in August 1944. Up until her death Rudy’s mother had searched in vain for information about her son’s fate. In October 2015, 71 years after Rudy’s disappearance, his nephew Gerald received a very surprising telephone call: Pauline Broekema, a Dutch journalist from NOS Broadcasting contacted him about some news he had never expected to hear. Among the personal effects shown on the recently launched Online-Archive of the ITS she had seen pictures of a notebook with a photo of Rudy pasted inside. The name of the owner of these effects preserved at the ITS was not known. However, the journalist managed to find out Rudy’s name on the basis of the photographic images of his journal entries.

„Immediately after the Online-Archive was launched, I had a look at the personal effects shown there and found myself somehow captivated by Rudy’ picture,” Pauline Broekema explains. “It didn’t let me go, I wanted to find out at all costs who this boy was”. The birthdate of Rudy’s father noted in the diary put her on the right track. Not only had Rudy written down the full date of birth, but he had also noted his father’s birthplace – a very small Dutch village where, on the date in question, only one child had been born. Using the birth registry in the regional archive she found out the name of Rudy’s father, and with that she had the key information to finding any living family members. Within a few days she located Rudy’s nephew Gerald t’Sas and phoned him. He and his children are Rudy’s sole remaining direct relatives.

What the notebook diary tells us

On 14 October 2015 Gerald t’Sas, together with Pauline Broekema, visited the ITS to receive Rudy’s notebook. For the first time Gerald held a photo of his uncle in his hands: “This photo gave my uncle a face. His notes gave back his identity”. Rudy’s diary reveals much about his life: he listened to the music of Duke Wellington and Count Basie as well as piano concerti from Mozart and Beethoven. He enjoyed taking photographs, going ice-skating and was infatuated with a girl, Geri, to whom he addressed the final entries in his diary. He marked off the days in a small calendar – for the last time on 17 August 1944. The final words in his journal were written the day he was arrested: “For my mother it’s the worst. As for me, I am resigned to my fate.” And: “I believed too soon that I was a free bird.” Rudy had gone into hiding from the Germans to escape being dragged off for forced labor. In August 1944 the liberation of the Netherlands by the Allies seemed to be just around the corner. Rudy went to the Arnheim train station, where he was arrested by the Nazi Security Forces – his hope for liberation had come too soon.

Rudy‘s parents never got over his disappearance; their marriage fell apart. They spoke neither to each other nor to others about their son, and they never showed any photos: “It was as though my grandparents were frozen,” said Gerald t’Sas. “They lived without living. Rudy’s piano and his radio were in their house, but no-one was ever allowed to touch these things. The music left the house when Rudy disappeared“. Rudy’s diary is the first effect at the ITS for which it was possible to ascertain the original owner due to photos of this special belonging being shown in the Online Archive.  “For me, this isn’t the first one. It is the only one”, Gerald t’Sas said during his visit. Along with the diary, the family received copies of all the ITS documents providing information on Rudy’s fate. These indicate that Rudy was deported via the Amersfoort transit camp to Neuengamme Concentration Camp, where he died on 7 November 1944 in the “Outside Unit Husum”. From the documents Gerald t’Sas also knows now where Rudy is buried. “It is good to have certainty about Rudy’s fate. But more than anything I am glad that I can learn more about my uncle through his diary.”