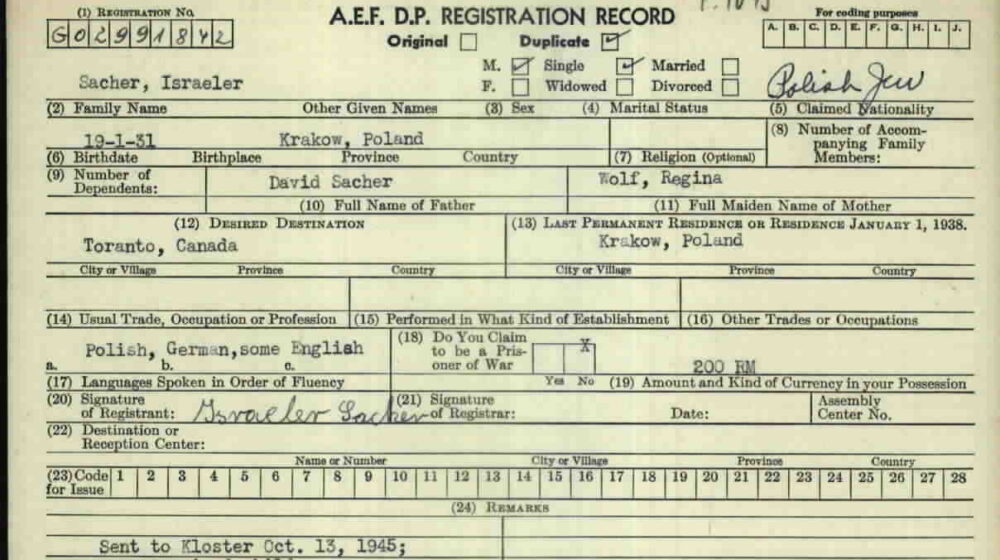 The “Child Search Branch” established by the Allies made frantic efforts to return children to the care of relatives in their home country, locate their relatives, organize their emigration, or find adoptive parents. Sacher Israeler was one of them.

The search required its staff to work hand in hand with other bodies, including Red Cross offices, Jewish organizations, and charitable institutions. UNRRA or IRO staff opened a file on each one of these children. Other files were opened if a relative – a parent, an uncle, or a grandmother, for example – was a searching for a child. These missing children were also listed as “unaccompanied children.” The Child Search Branch was part of the International Tracing Service, and the organization’s archives contain more than 64,000 files on children who were missing or found alive after being persecuted, murdered, or imprisoned by the Nazi regime.

Sacher lost his family in the Tarnow ghetto

Sacher Israeler was born in Krakow on January 19, 1931, the youngest of five children. His father David had his own textile business; his mother Regina took care of the house and looked after the children. Sacher’s eldest sister Mania was a university student, Rozia and Danka worked in their father’s textile business, Hela attended high school, and his brother Wolfik was at grammar school. The family moved from Krakow to Tarnow in 1939, hoping to avoid being sent to live in the ghetto. However, a ghetto was soon established in Tarnow, too, and raids and arbitrary shootings were carried out there.

When the “operation” in Tarnow began in June 1942, and the ghetto was going to be liquidated in the foreseeable future, Sacher and one of his brothers escaped through a window and ran away to hide. That was the day his mother and two sisters were shot. Badly wounded, his father managed to drag himself back home from a death pit. A bullet had hit him in the neck and torn away his jaw – he died the same evening. Later, his older brother was shot dead too. Sacher survived, and when the ghetto was finally liquidated in 1943, his life was spared.

After being deported to the Plaszow concentration camp, surviving 24 hours in Auschwitz, and being taken to the Flossenbürg concentration camp in August 1944, he was compelled to perform forced labor in an aircraft factory there. In April 1945, when the Allied troops were advancing from the east and the west, the SS drove the prisoners from Flossenbürg concentration camp on a death march in a southerly direction. After spending eight days on the move and making part of the journey on foot, Sacher was liberated in Neukirchen by American soldiers. 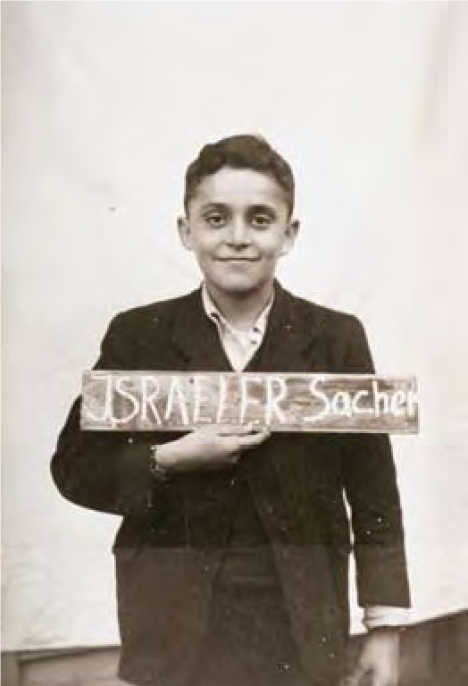 »My childhood came to an end when the German troops invaded.«

Indersdorf DP camp and the search for relatives

Sacher Israeler was taken to Neunburg vorm Wald together with Jacob Bulva and Moses Steinkeller. They had already been together for large parts of their odyssey through various camps. They stayed in a hospital for four days and then came to the U.S. Army headquarters in Neunburg, where GIs found them a place to sleep and supplied them with food and clothing. Sacher was able to travel to Gablonz on the Czechoslovakian border with a U.S. Army unit and visit his uncle, Julius Rausnitc, one of his few surviving relatives. Afterwards, he returned with the soldiers and was admitted to the DP Children’s Center in Indersdorf on October 12, 1945, together with his friends Jacob and Moses.

“I wanted to get out of Europe, this big graveyard.”

Then another aunt was found, Anna Schanz, from his father’s side of the family. She had been in the Plaszow concentration camp, too. She wanted to accompany him when he emigrated to the U.S.A., and a letter she wrote to him in January 1946 included the following words: “Pack up everything you own, my dear, […] I’m sure you’ll like it there, and besides, you won’t be alone any more. Hurry up, pack everything together and make your way to us. Many greetings and kisses from your Aunt Anna.”

Sacher was later known as Steve, and for many years, he ran a successful business in the U.S. with one of his cousins.