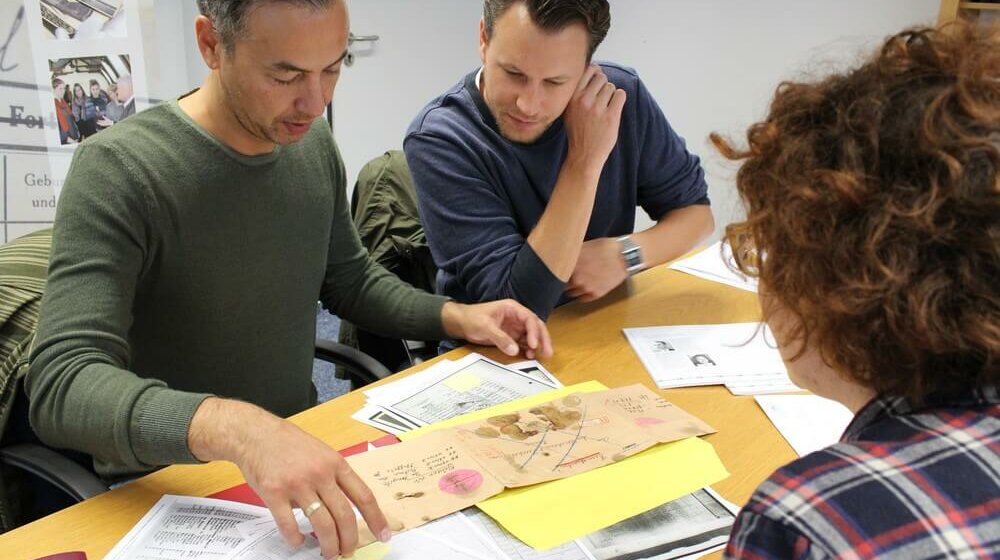 It was a strange heirloom that the cousins Martijn and Robert de Jongste of Holland received at the end of October 2018: a stained brown envelope addressed to the administration of the Ebrach Prison. It had been sent by the Staatliche Luitpold-Krankenhaus—that is, a hospital—in Würzburg. According to a note on the back, the envelope contained money for three prisoners. At the top of the list was their grandfather’s name: Bastiaan de Jongste.

“Our grandfather was very clever with his hands,” Martijn recalls. “He used to make us grandchildren the neatest things!” During the German occupation, Bastiaan used his skills in the resistance to forge stamps and stationery of the security police and to obtain false papers for American soldiers shot down by the occupiers. His activities in the resistance had gotten off to a very harmless start in 1940, when he and a friend turned street signs so the Germans would lose their way. Later he also used his company car to help American soldiers flee.

Bastiaan’s contact person in the resistance was a young woman named Elly. By phone, the two would arrange rendezvous for passing on papers or information. One day, however, it wasn’t Elly but a strange man who answered the phone. Obviously, something had gone wrong. Bastiaan gave his brother Jan a suitcase with incriminating objects. Jan put the suitcase in a locker at the train station. On the following day, March 12, 1944, Bastiaan was arrested in The Hague.

He spent the following months in solitary confinement—often in the dark and without food. He was transferred from the Oranjehotel in Scheveningen to the Herzogenbusch concentration camp and then, in early July, to the Wehrmacht prison in Utrecht. There a court martial sentenced him to death on July 15, 1944 along with nine other men and women from the resistance “for illegal possession of firearms and aiding the enemy”. At least two of them—Joan Gelderman and Jan Berend van Delden—were executed that September.

Until his liberation in the Brandenburg-Görden Prison on April 27, 1945, Bastiaan lived in constant fear of death. “We can’t say for sure why he was never killed. Probably the order from Berlin that was supposed to confirm the death sentence got lost,” his two grandsons conjecture.

Hitler himself had already decided on the fate of members of the resistance in the occupied countries back in 1941. They were to be taken secretly to German prisons, without their families learning anything of their whereabouts. These so-called “night and fog inmates” simply disappeared without a trace. The method was to serve as a deterrent. Bastiaan de Jongste was taken to the former Ebrach Abbey in Bavaria. For his later wife Ineke and the family, it was as if he was dead.

The envelope received by Robert and Martijn de Jongste during their visit to Bad Arolsen must have dated from this period. Bastiaan had told his grandchildren a lot about his time in the resistance. Robert had even interviewed him once for a school project. He was nevertheless surprised when Annelies Sijtsma contacted him by Facebook and told him about the envelope. It was among the approximately 3,000 personal belongings of former inmates for which, in the framework of the #StolenMemory project, the ITS is looking for the owners or their families to return the objects to. Annelies Sijtsma is supporting the project on a volunteer basis by looking for family members in Holland. The ITS can no longer reconstruct how the envelope made its way into its holdings (most of the so-called “effects” came from the Neuengamme and Dachau concentration camps) or why it was on file as a personal possession of Bastiaan de Jongste for decades.

Along with the envelope, the two cousins also received copies of all documents in the ITS pertaining to their grandfather. Among them is the detailed, 26-page verdict on Bastiaan de Jongste and his fellow prisoners from the Dutch resistance. It is a testimony to ten brave men and women who were prepared to risk their lives for their convictions.

It’s hardly surprising that Martijn de Jongste sums up how he and his cousin saw their grandfather with the words: “Opa was our superhero!”