Signet ring now on its way back to Spain 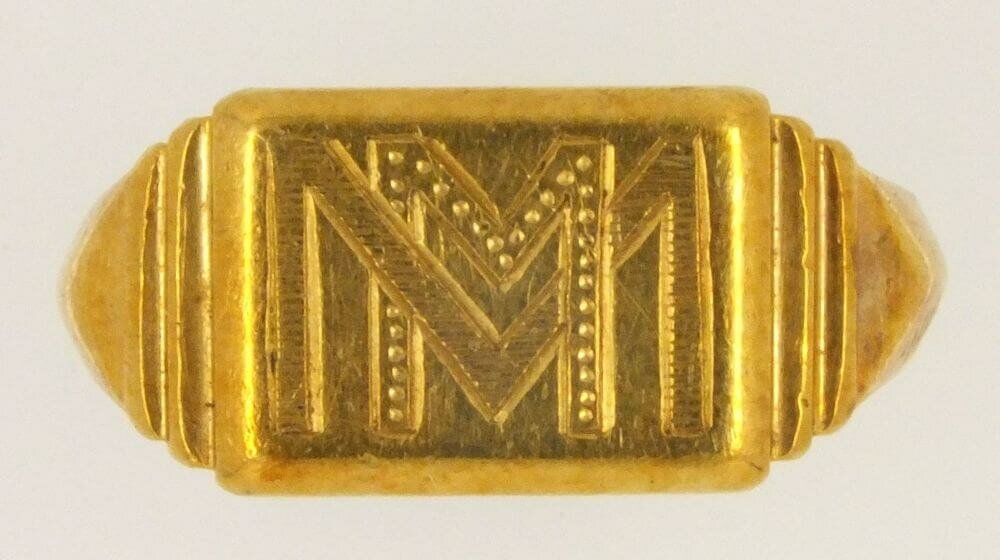 A gold signet ring belonging to former concentration camp inmate Miguel Santos will soon be returned to his niece, who lives in Spain. She got in touch with the Arolsen Archives after seeing a photograph of his ring in the daily newspaper El Mundo.

It was quite a surprise and a very emotional moment for Nieves Cajal Santos when she happened upon a photo of a ring engraved with the letter “M” in the newspaper. The ring had belonged to her uncle Miguel, who was deported to the Neuengamme concentration camp by the Nazis in 1944. The article in El Mundo explained that some of the objects stored in Bad Arolsen were owned by Spanish concentration camp inmates. It took a few days for Santos to pluck up courage to write to the Arolsen Archives and tell her uncle’s story. Thanks to her, the signet ring and copies of various documents will soon be put in the post and sent to Spain.

Learning more about the persecution suffered by members of her own family was an emotional experience for Nieves Cajal Santos. “It was very painful for me to read the letters my two uncles sent home from the concentration camp, which I found among my mother’s papers after she died,” she reports. The family lost both sons, Jesús and Miguel. After fleeing from the troops of the Spanish dictator Franco, they were housed in a camp in Argéles Sur Mer in France from 1939 on. Miguel worked as a nurse, Jesús as a doctor.

In May 1944, the Gestapo arrested the brothers in German-occupied France for providing medical treatment to members of the French Resistance. They were then deported to the Neuengamme concentration camp in Hamburg.

Tragic death in the Bay of Lübeck

Miguel Santos died tragically in April 1945. Following the evacuation of the Neuengamme concentration camp, the National Socialists drove several thousand inmates onto decommissioned ships at anchor in the Bay of Lübeck. British bombers sank the steamers in the mistaken belief that they were carrying German troops. The SS had destroyed all means of escape and all the rescue facilities on the ships beforehand. The Nazis sent Miguel’s brother Jesús on one of the infamous death marches. He was liberated in the Sandbostel sub-camp, but was seriously ill and emaciated and died later in a hospital for Displaced Persons.