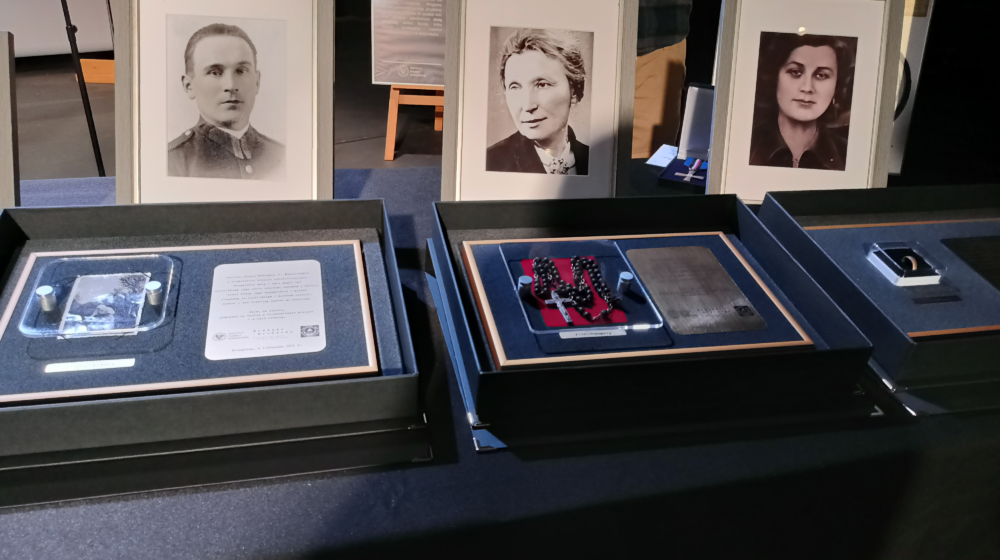 On November 4, during the opening of the #StolenMemory exhibition in Białystok, four families were given personal items that had belonged to relatives who were imprisoned in German Nazi concentration camps. The ceremony took place at the Podlaska Opera and Philharmonic – European Centre of Art.

Four photos, four victims of Nazi persecution: Janina Kacała, Zofia Bieniewska, Henryk Kowalczyk, and Piotr Błaszczyk. There are objects in front of their portraits – the items they had with them when they were sent to the concentration camps: a rosary, a picture, a wedding ring, and a pocket watch. Dr. Karol Nawrocki, President of the Institute of National Remembrance, pointed out that these personal belongings are full of stories and biographical information.

“We would like to tell these stories so that they can be heard and remembered. We want to fill the gaps in family stories,” said Floriane Azoulay, Director of the Arolsen Archives, the organisation that launched the #StolenMemory campaign to return objects from World War II that are still stored in their archives.

Floriane Azoulay also noted that the opportunity to meet three families at once was a first. She used her speech to present the scope of the archives’ activities and the history of the objects that were given to the International Tracing Service by the Allies. She placed particular emphasis on the special role volunteers play in searching for the families of the objects’ owners.

“Your work is extremely important – it shapes the way our societies deal with the past and how we shape the future for the next generations,” she added.

In his speech, the President of the Institute of National Remembrance made special reference to the name of the campaign and the exhibition itself – #StolenMemory. “Memory cannot be stolen, memory cannot be destroyed,” he said. He also highlighted the importance of preserving the memory of the terrible events of the 20th century and the experience of the Polish nation, and he thanked the Institute of National Remembrance and the Arolsen Archives for cooperating in this area. 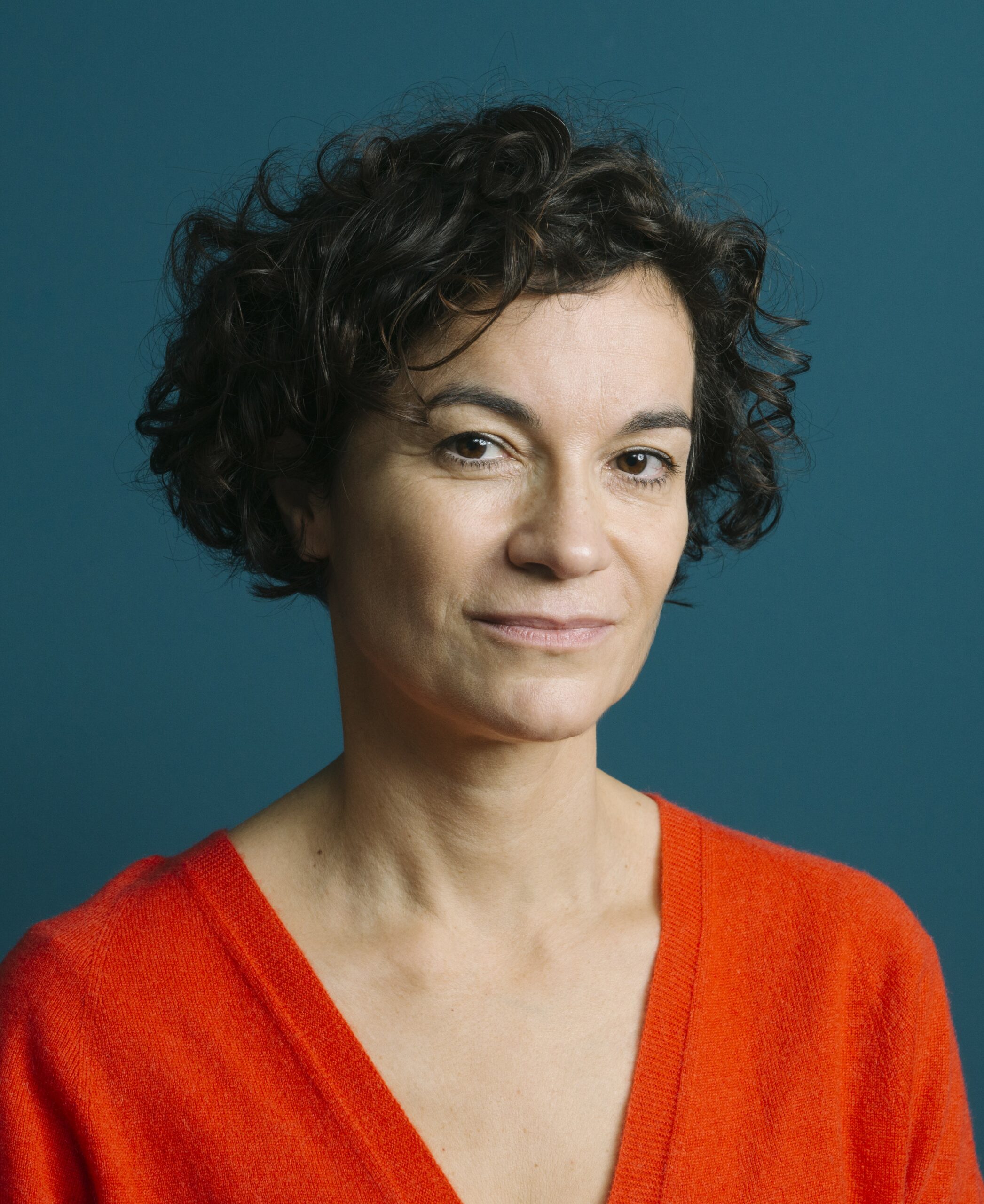 »We want to make it clear that the process of coming to terms with Nazi crimes is not yet done with in Germany. We’re keeping at it, and we want to help fill in the gaps that still exist in many family histories. Often, it is not until personal effects are returned that the families begin to talk about their relatives’ painful experiences during the Nazi era.«

Henryk had a photo with him

Agnieszka Bocheńska, Henryk Kowalczyk’s granddaughter, shows us her grandfather’s effects. She spreads out photos and other personal belongings on the table. Some of the items – a wrist watch, a chain, and a wedding ring – were returned to the family in 1995. The photo that her grandfather had with him in the camp has only now been given back to them.

“I feel so many different emotions that it is difficult to describe them in one word. On the one hand, there is joy, but on the other hand, there is sadness that he did not survive, did not come back. Because he actually survived three camps, survived the war, but he did not come back to us,” explained Agnieszka Bocheńska, who attended the ceremony with her brother Krzysztof.

Henryk Kowalczyk was working in the prison service in Pawiak when the war broke out. From the very beginning, he helped Poles who had been arrested by providing them with food, clothes, and medicines. In August 1940, he was arrested himself and imprisoned in Pawiak. From there, he was sent to Auschwitz – on the same transport as Witold Pilecki, the future organizer of the underground movement in Auschwitz concentration camp. Henryk worked for Pilecki in the structures of the camp underground.

In March 1943, he was taken to Neuengamme concentration camp. It is known that in April 1945, when the camp was evacuated, he was placed on the ship Cap Arcona, which was later bombed in the Bay of Lübeck by the Allies. Henryk Kowalczyk died on May 3, 1945.

But the photo is not the only thing that has now been given to the family – they have also received information about where their grandfather was buried. Before that, nobody knew. Henryk Kowalczyk’s granddaughter explains that her parents went to Hamburg and visited the grounds of the former Neuengamme camp, but they learned nothing at the time because there was a penitentiary there at that time. They went on a ship and threw flowers into the sea to say goodbye to him. Recently, his grandchildren Agnieszka and Krzysztof visited their grandfather’s burial place. They took some Polish soil with them and lit a candle.

Grandma didn’t talk about the war

“It was only this year that I found out that there was anything left that had belonged to my grandmother,” explained Helena Szymańska, granddaughter of Janina Kacała, shortly after receiving the golden wedding ring. The search for the family was mainly conducted on social media. The information posted on the Internet was noticed by Helena’s friends who then informed her about it.

When we ask her what her grandmother was like, she recalls that she was a very quiet person – she did not talk about the war and her time in the camp, this was a topic that she avoided.

In June 1944, Janina Kacała was sent to Ravensbrück concentration camp as a political prisoner. After that, she was transported to Watenstedt (a sub-camp of Neuengamme), Hanover, and Bergen-Belsen. After the war, she returned to Poland. Her three brothers died during the war, and her sister was deported to Siberia.

Among the belongings of the former concentration camp prisoners that were returned to their families in Białystok, there is also a rosary. The rosary was probably very precious and very important to Zofia Bieniewska, because it has been repaired many times. This moving memento has now been given to her niece, Zofia Zdancewicz-Stojak.

During World War II, Zofia Bieniewska – like her husband – was active in the Home Army. She was involved in providing food and medicines and giving shelter to members of the underground. In January 1944, she was arrested by the Gestapo for her political activities. In March, she was transferred to Ravensbrück, where she was given the number 32692. In June, she was taken to a sub-camp of Neuengammewentor. She returned to Poland on November 15, 1945.

The Arolsen Archives also hold a pocket watch belonging to Piotr Błaszczyk – known to his grandchildren as “Sweet Grandpa” – who was a baker by profession. It will soon be returned to his family. In January 1944, Piotr Błaszczyk was arrested for alleged political activity. He was then sent to prison in Białystok. Two months later, he was transported to Stutthof concentration camp, and after another two weeks, he was transferred to Neuengamme. He returned home after the war.

“The work we do is not just about returning a memento that was the last thing that belonged to a loved one, most importantly, it is about preserving the memory of that person and explaining their fate,” emphasizes Małgorzata Przybyła from the Arolsen Archives Tracing Team. For 30 years, she has been helping to fill in the gaps in family stories by providing information about their loved ones who fell victim to Nazi persecution.

The #StolenMemory exhibition, which we recently showed together with the Institute of National Remembrance in Bydgoszcz and Warsaw, is displayed in Bialystok till the end of November. The exhibition presents the fates of 16 persecuted people from various regions of Poland whose personal belongings were stolen by the SS.

Some of these items are still stored in the Arolsen Archives. As part of the #StolenMemory campaign, we are looking for the victims’ relatives in order to return the belongings to them.