The story of a simple man 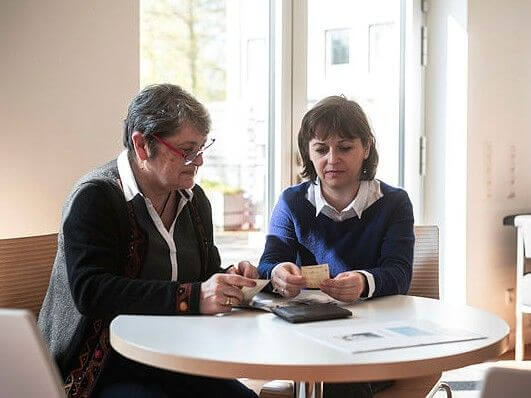 … is the title of the biography that Claudine Bons-Bourguignat wrote about her grandfather. Despite intensively researching his fate, it was not until she contacted the ITS that she discovered why Jean Vergne had been deported to a concentration camp.

Claudine first heard about her grandfather in 1959, when she was 12. This is when his remains were returned to France from the former German concentration camp at Sandbostel, where he had died on April 18, 1945. Jean Vergne’s body was accompanied by the pocket watch he had been wearing when he was arrested. To this day, Claudine keeps the watch in the drawer of her nightstand.

Her grandfather was arrested on May 11, 1944, together with around 40 other men in Latronquière, a small village in the department of Lot. He was taken to the French internment camp at Compiègne and deported from there to the Neuengamme concentration camp on June 4, 1944. After a few weeks, Jean was transferred to the Meppen-Versen satellite camp for forced labor. At the end of March 1945, he and others were taken by the SS to the Sandbostel concentration camp, where many prisoners died at the end of the war.

His family researched all of this on their own after Claudine and her husband began to look into genealogy in the early 1980s. In the 1990s, Claudine’s daughter Christelle took over the research into her great-grandfather Jean. As a prospective librarian, she knew which archives to search in order to find more precise information about him. The family was driven by two questions: Why had Jean been in Latronquière when he actually lived in Paris? And why had the SS arrested him?

In 2017, Christelle discovered some of Jean’s personal effects – a few photos and his wallet – in the digital archive of the ITS. She also found an index card in the database that hinted at why he was arrested. The card showed that he had been forced to work for a company in Thuringia, Germany from December 23, 1942, to December 31, 1943. Claudine and Christelle suspect that he did not want to return to Germany and had gone into hiding in Latronquière.

In April 2019, Claudine and Christelle visited Bad Arolsen in person to pick up the pictures and wallet and view the original documents. “It was an intensely emotional moment when I held these photos of my grandparents for the first time,” Claudine said. “The work of the ITS is so important – we not only learned a lot about my grandfather here, but also about the history of Nazi persecution.”