Suddenly She Has a Big Family 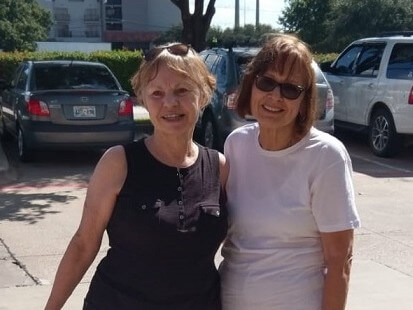 Miriam Shorer was born in a Displaced Persons Camp in 1946 and grew up in Israel as an only child with adoptive parents—happy, but without a biological family, or so she thought. Thanks to information from the ITS, it turned out that she has a half-sister and an aunt in the U.S., as well as cousins, nieces and nephews. And some of them even live in Israel. Suddenly she has a big family and her life is topsy-turvy.

Miriam and her husband Oded Shorer had already inquired with the International Tracing Service (ITS) twice before in an effort to learn the identity of Miriam’s mother, but there was never enough data for a successful search. Then, in the spring of 2018, new information came to light, leading to the reconstruction of the family history. Miriam’s mother Pola Majerowicz was born in Korzynzur, Poland. She survived the Holocaust disguised as a Polish forced laborer. She also managed to hide her younger sister by those means. In 1946, she gave birth to a daughter, Maria Miriam, at the Veersen DP Camp near Uelzen; the father was a Pole. According to Miriam’s new-found relatives, her mother was persuaded to give up her child because the father wasn’t a Jew. The baby was taken to the Bergen-Belsen DP Camp and, in 1948, to Palestine by ship. A childless couple adopted her and gave her their name. They were loving parents, but they didn’t want her to look for her biological mother. So she waited until after they had passed away.

From the ITS she learned that her mother had had a second child in the Feldafing DP Camp in 1948 and married the father. She also found out that her mother Pola had died while she was still in Feldafing. The ITS documents moreover reveal that three of Pola’s siblings survived the Holocaust and five were murdered. With the aid of all this information, Miriam’s husband Oded found Miriam’s cousins and half-sister, Sara Lea Davidovicz, who meanwhile calls herself Shirley and lives in Dallas. A younger sister of Pola’s also lives in the U.S. but suffers from dementia.

The Shorers gradually contacted all these people by phone and met with some of them in person. Like Miriam and Oded, some of the family live in Tel Aviv. They learned that Pola committed suicide. The ITS continued researching the case and, at the state compensation office in Munich, found Pola’s medical records with details on her suicide. She had apparently suffered from postpartum depression. The family suspects this was because she had given up her first child, but also because of all she had gone through during the Holocaust. To date, all efforts to find her grave have been in vain.

In the fall of 2018, Miriam and Oded flew to the U.S. They could hardly wait to meet Miriam’s half-sister and other branches of the family in Chicago. They’re tremendously happy to have had this opportunity, and about the research carried out by the ITS. Oded praised the untiring work of the ITS staff: “They never gave up, even though we had already given up.” His wife can still hardly believe that—after seventy years—she has a biological family. “I have a wonderful family, very warmhearted. And it’s a big family. One of my cousins, for example, has thirty grandchildren.”