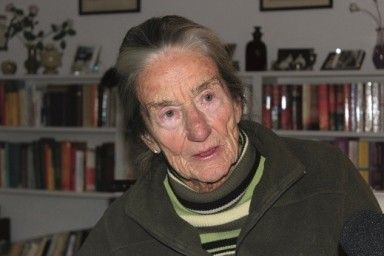 When the Gestapo arrested Helga Thörl, then a young woman from Hamburg, in April 1945 they stripped her of all her personal belongings, among them a wristwatch. In November 2015 the International Tracing Service (ITS) was able to return this wristwatch to the now 91-year-old. For the first time in many years the ITS could personally return a stolen item to a survivor. For Helga Thörl and her family the watch is an important key for opening up old memories.

“It is both surprising and fascinating how, with just this small object, such a strong connection to the past is suddenly there,” explains Helga’s daughter-in-law, who was there at home with Helga when the ITS returned the watch. “Ever since knowing about the watch, we talk much more in the family about the family history.” Helga Thörl hadn’t spoken about the weeks of her incarceration for a very long time; but she recognized her watch immediately. Even today she wears a surprisingly similar wristwatch.

Because of their overt criticisms of the Nazis, a neighbor denounced the young Helga and her father. The Gestapo arrested them as so-called “Schutzhaftgefangene” (protective custody prisoners) – thus denying them court proceedings. Helga Thörl was taken and registered at the Fuhlsbüttel police prison in April 1945 and from there deported to the Nordmark disciplinary labor camp in Kiel.

“My mother was always afraid that something like that could happen”, she says. “Because my father and I couldn’t keep our mouths shut. We were both very impulsive.” Helga survived the inhuman prison conditions and was able to leave the camp shortly before it was liberated by the Allies. Her father died only a few weeks later, succumbing to the repercussions of his imprisonment.

It is thanks to a journalist from Cologne that Helga Thörl has now gotten back her wristwatch after all these years. In 2015 the journalist made use of the list on the ITS website of personal effects and began searching for owners or their heirs – and managed to locate Helga Thörl. It is only in very rare cases that personal belongings from the time of incarceration can be returned to the survivors themselves – after so many decades it is more likely that the recipients are members of the second or third generation.