The Drawings of a Resistance Fighter 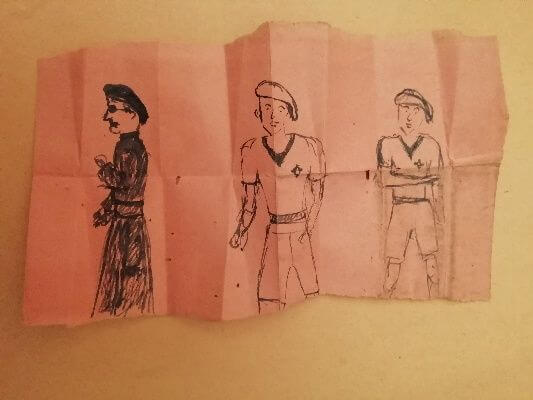 In December 2018, Guy Allain’s daughter Brigitte received a very special package. It contained a wallet and two little strips of cloth. In the wallet there were two drawings. One is a scrap of squared paper with a pencil drawing of a cross with a heart at its center. The other, on a small slip of folded paper, is a sketch of three people—two wearing a kind of uniform with berets on their heads and a third, dressed in black and wearing sunglasses, turning his back to them. The Nazis had taken these objects away from her father seventy-five years earlier, when, at the age of seventeen, he was deported to the Neuengamme concentration camp.

The Germans had arrested Guy in December 1943 in Saint-Brieuc, western France, along with eighteen schoolmates. The boys belonged to the Front Uni des Jeunes Patriotes resistance group. A few days after the shooting of a German non-commissioned officer, the occupiers had carried out a raid and found the officer’s gun in the home of one of the group’s members.

Brigitte’s cousin Francis recalls that parents of the high school pupils had also been arrested and detained for a while. “Especially the fathers, to make an impression.” Guy’s father was among them. Three of the youths were shot to death, eight deported. “My father never talked about it,” Guy’s daughter tells us. But the time he spent in the concentration camp left its mark on him, both physically and emotionally. “After his liberation he went to Switzerland for six months for treatment.” Later he received psychological support from an association of former deportees in Paris. There was a phase where he often went into fits of anger. Nevertheless, Guy Allain never regretted being in the resistance.

Guy was assigned the inmate number 30684 and put to work as a forced laborer for the Volkswagen company. One story he used to tell gives a sense of the horrors he experienced in the camp: “Towards the end of their imprisonment in Neuengamme, they killed a dog for food. The whole camp was punished for it.”