The lost daughter: A family is reunited in Poland 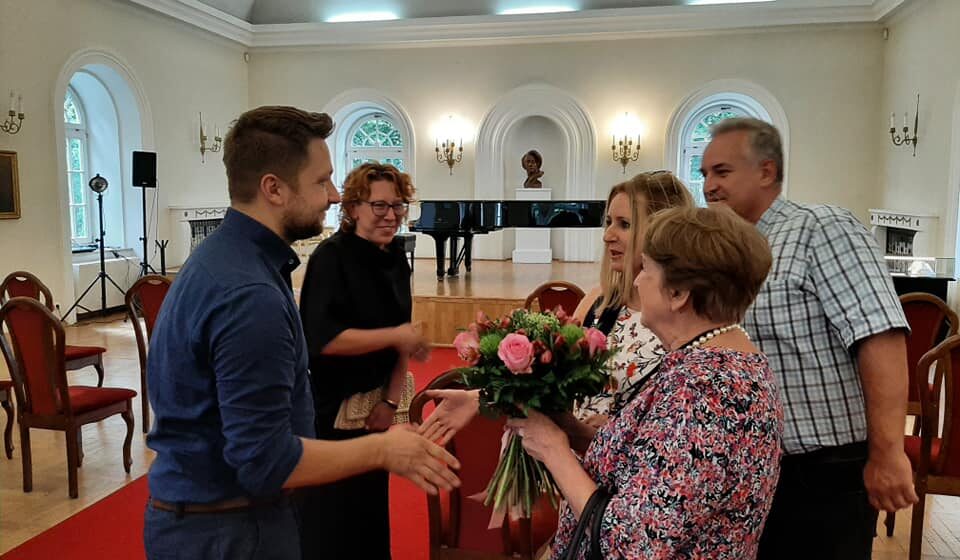 It took nearly 80 years before the sisters could finally meet. Until recently, 79-year-old Maria from Poland didn’t even know she had siblings in Germany. But her sister Ursula, who is three years younger, had grown up with her mother’s memories of Maria. Their mother had searched for her lost daughter for decades and missed her for her entire life. Thanks to research by a Polish local historian and the support of the Arolsen Archives, the sisters were finally able to meet virtually for the first time.

Maria and Ursula sit in front of computers with their families. They are separated by several hundred kilometers, and by technology. Someone has to help them with the connection for the online meeting, turn on the sound and set up the camera so the sisters can get a good look at each other when they meet for the first time. Do they look alike?

Gertrud had to flee without her daughter

Ursula, the younger sister, lives in Germany. She only knows her sister Maria from a picture that their mother, Gertrud Koch, kept in her wallet. Ursula can see immediately that Maria looks very much like Gertrud. “My little Brigitte,” her mother used to say when she talked about her first daughter. She gave birth to Maria on December 7, 1942 in Breslau and named her Brigitte. But Gertrud was separated from Brigitte after a bomb alert at the end of 1944 and had to flee Poland soon afterward. Despite searching intensively, she never found her daughter again.

Brigitte wound up in an orphanage and was adopted by a Polish family – and Brigitte then became Maria . Maria’s adoptive father, a lawyer, had even changed her name to Brigida Widiger shortly before the adoption to erase all traces of her origins. When Maria turned 18, her parents did manage to tell her she had been adopted, but her father said in the same breath, “Don’t look for information, you won’t find anything.”

Maria was finally able to discover her true identity thanks to local history enthusiast Dariusz Giemza from Poland. He has spent several years researching the mysterious history of the former orphanage in his hometown of Duszniki Zdrój (formerly Bad Reinerz in Silesia), where Maria lived. Dariusz has compiled a wealth of information and documents to bring to light the true origins of the children from the orphanage.

»Revealing the history of these children has become my mission in life, and it has led to incredible discoveries. It has been many years of hard work, sleepless nights, and trawling through dozens of archives.«

Maria’s daughter read a newspaper article about Dariusz’s research and got in touch with him, hoping that he might know something about her mother’s background. Together they determined that Brigida Widiger and Brigitte Koch must be the same person – even their dates of birth were the same. Dariusz found out that Maria’s birth mother, Gertrud Koch, had fled to Bavaria. In December 2020, Maria and Dariusz turned to the Arolsen Archives to find information about Gertrud.

»With the help of the authorities, my personal details were falsified and new documents were issued for me. My real mother Gertrud Koch searched for me. But I was never able to obtain any information myself because I do not have an adoption certificate.«

From Marias inquiry to the Arolsen Archives

Because the work of the Arolsen Archives focuses on the victims of Nazi persecution, there is hardly any information about Germans from what is now Poland in our collection. Nevertheless, there was one revealing document that our team could use to search for clues: Brigitte’s name appeared on a list of children who were in the orphanage in Duszniki Zdrój in 1945/1946 – and Gertrud’s address in Bavaria at the time was also listed there. With this clue, we were able to locate her second daughter, Maria’s younger sister Ursula, through the German authorities. Maria and Ursula began calling and writing to our team. They sent pictures and shared their stories and memories with us. Finally, they contacted each other directly and arranged their first meeting via video conference.

Ursula grew up with her mother’s memories of “little Brigitte.” She never imagined she would actually meet her missing older sister one day. We asked her what her mother had told her about Brigitte/Maria and how it feels now that the mystery of her lost sister has finally been solved.

When did you first find out about your sister in Poland?
I always knew I had an older sister who had to stay behind in Poland when my mother fled, and that we were looking for her. My mother was often sad and pensive during my childhood. Whenever I asked what was wrong and wanted to comfort her, she would say, “Oh, I miss my little Brigitte so much.” There was also a picture of my younger sister as a child that my mother always carried with her in her purse.

What did your mother tell you about Brigitte?
She found it hard to talk about Brigitte and her time in Breslau. All she told me was that she had lived with my grandfather in Breslau as a young woman. She had seven siblings who lived there as well, but they had already moved out. Her mother had died. Brigitte was born in the middle of the war, on December 7, 1942, when my mother was 31 years old. When I asked about our father, she would just say that he went missing in the war. She always described Brigitte as her “sunshine” and a happy child.

Bomb alert: All the children were gone

Why did your mother have to leave Poland without your sister?
She would take Brigitte to a nursery during the day so she could go to work. My mother was a saleswoman in a delicatessen. The owner always gave her food, so she was well provided for despite the wartime shortages.

One evening in November or December 1944, the mothers were standing outside the nursery and realized that all the children had disappeared – just vanished. They were told that their children had been taken to safety after a bomb alert. My mother and grandfather searched desperately for Brigitte, but they didn’t have much time. In January 1945, they had to flee from the Red Army. My mother was already heavily pregnant with me by then.

So you were born in Germany?
That’s right – after six weeks on the run, my mother ended up on a farm in a small Bavarian village. She was able to live there and was even given food, but she had to work very hard for it. I was born on this farm on March 26, 1945. Later on we moved to live near relatives in the Sauerland region.

How did your mother search for Brigitte?
Through the German Red Cross and with the help of relatives who had also fled to Germany. But it was hard to find any reliable information about missing persons in Poland after the war. In any case, the Red Cross stopped looking after 20 years without any results.

Family reunion through the Arolsen Archives

Then you heard from the Arolsen Archives that Brigitte had been found after all …
That surprised me so much. I’m grateful that I can now share this story after all. My mother made me swear to never tell anyone about her first daughter, and I kept that promise until I received the first news about Brigitte a few months ago. It was good to talk about her with the people at the Arolsen Archives. And finally I could also tell my own daughter about her aunt in Poland. But it also makes me sad that my dear mother wasn’t able to experience this herself. She would have given anything for it – she missed her Brigitte until she died in 1994.

What was the first meeting like?
Very exciting. I had never done a video conference before. A friend who is originally from Poland helped me with the technology and language. Of course, it’s a pity that I don’t know Polish and Brigitte doesn’t know German. We’ll always need translators. Nonetheless, it was quickly clear to me that she really must be my sister. There are so many similarities and parallels – from her looks, to her musical talent, to the bad varicose veins we inherited from our mother. We had actually planned to take a DNA test, but now I’m so certain about her that I almost think we don’t need to any more.

It has been an exciting year for Maria, Ursula and their families. Their children, nephews, nieces and friends are also delighted to be in contact, and they are already planning to meet in person. This could happen as soon as the spring of 2022 in Poland. Maybe the sisters will even meet in Wrocław in the house where Brigitte used to live with their mother Gertrud and their grandfather.

Dariusz Giemza will also stay in touch with the sisters. He is happy to have been able to solve another family mystery from the orphanage in his hometown with the help of the Arolsen Archives. And there are many more fates to clarify – Dariusz has a list with the names of over 200 children whose identities were falsified. We’ll keep searching!