The Search Took Nearly a Year 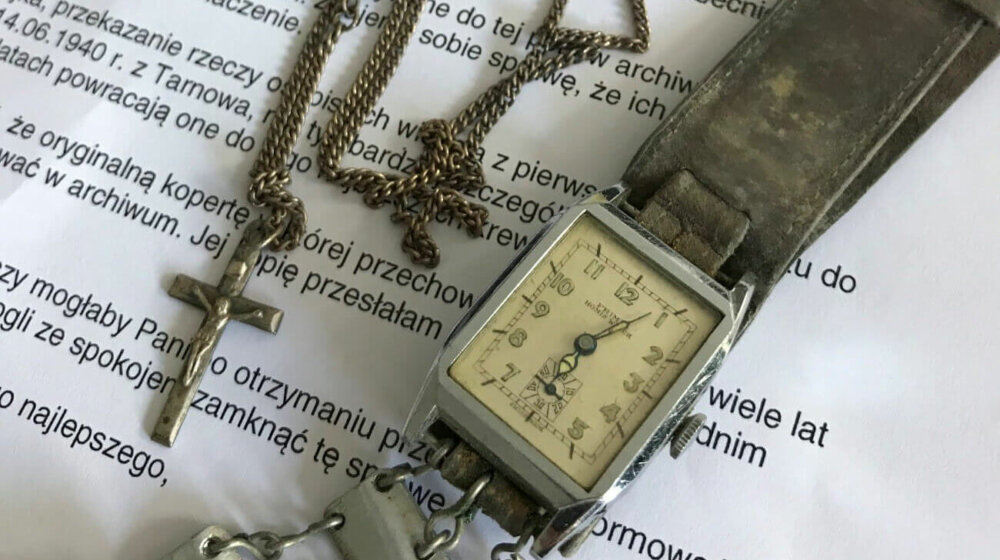 An important package is presently on its way to Poland. It contains a wristwatch and a necklace with a crucifix pendant—two items once belonging to Bolesław Hermanowicz. He was among the 728 Polish political prisoners the German occupiers deported to the newly built Auschwitz concentration camp on the first inmate transport on June 14, 1940.

Bolesław was seventeen years old at the time. There is only very little information about him in the archive of the International Tracing Service. We do know that he was a painter by profession and was assigned the inmate number 707. On March 12, 1943 the SS had him transferred from Auschwitz to the Neuengamme concentration camp. His personal belongings were sent there as well, for storage in the Neuengamme effects depot. They were his last remaining possessions and their survival to the present indicates that he was still alive when the Neuengamme camp was cleared shortly before its liberation. The date and cause of his death are still unknown.

When Malgorzata Przybyla, a member of the ITS staff, visited the Auschwitz-Birkenau Memorial in May 2017, she had this sparse information about Bolesław with her. She asked her colleagues there whether they knew more, perhaps even the whereabouts of his family. She learned that a Pole living in Germany had recently made an inquiry about him. It turned out that this man had found a letter Bolesław had written to his mother from Auschwitz at a flea market, purchased it, and was trying to find out more about the young man’s fate. He sent the ITS a digital copy of the letter. And that letter contained what looked like a promising clue: his mother had lived in the Polish town of Radom.

However, all attempts to find relatives of Bolesław’s through the Radom municipal administration failed. Then Malgorzata Przybyla asked the journalist Jowita Flankowska for help. The latter undertook an intense search, going to cemeteries in the vicinity and asking everyone she could think of. In late 2017, her efforts were finally crowned with success. “I’ve done it, Ms. Przybyla!!!” she wrote. “I’ve managed to find further information about the family. His sister unfortunately died on June 16, 2008. But she left two daughters (twins!) behind! One’s name is Maria and she lives in Radom; the other, Ewa, lives in Jastrzębie Zdrój.”

Bolesław’s nieces are now receiving the personal belongings of the uncle they never met.