The Uncle No One Talked About 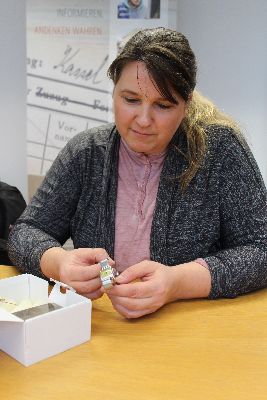 In Melanie Haarmann’s family, no one ever said much about her grandfather’s brother Ernst Egon apart from: “He was killed in action.” Then she received a letter from the International Tracing Service (ITS). It said that the personal belongings the Nazis had taken from her great-uncle when they committed him to the Neuengamme concentration camp were in the ITS holdings. As Ernst Egon Haarmann’s closest living relative, she could have these items. As Melanie Haarmann later told us: “I was confused when I read that letter, and started wondering: Concentration camp? Do I have Jewish relatives?”

The Nazi regime persecuted people for a lot of reasons. In the initial years after Hitler came to power, concentration camps were above all a means of silencing political opponents. Yet people whose behavior didn’t correspond to the “healthy National Socialist Volksgefühl [people’s feeling]” were also made targets of persecution. Himmler declared the “eradication of criminality” a paramount goal. Now so-called “professional criminals” could be put in “preventive police detention” without trials or official convictions. It sufficed for a person to be attributed with a “criminal will.”

The ITS documents reveal nothing about the date or grounds for Ernst Egon’s arrest. He was in custody in the Walchum prison camp IV, one of the infamous Emsland camps, in June 1935. Most of the inmates there had been convicted for criminal offenses and were put to work performing extremely heavy labor in the reclamation of moorland for agricultural and residential use. They were not only deliberately deprived of any machinery to aid them in this work, but also subjected to physical abuse by the guards.

In early August 1936, Ernst Egon was transported to Cologne. The archive contains no information about his whereabouts over the five years that followed. Starting in 1941, he was imprisoned in several penal facilities—in Siegburg, Bochum, Bonn and Münster. The grounds for detention mentioned in the records are “fraud” and “personal offense.” When he was committed to the Neuengamme concentration camp on April 16, 1943, he had to turn in his wristwatch, cigarette case, tiepin and wedding ring. He and his wife Paula were meanwhile divorced.

His belongings were never returned to him. At the end of April 1945, the Neuengamme guards sent the remaining inmates on a northward march to keep them from falling into the hands of the advancing British. In Lübeck they were divided among several ships. On May 3, 1945, the British Royal Air Force mistook the Cap Arcona and the Thielbek for German troop carriers and sank them in the Bay of Luebeck. Ernst Egon Haarmann presumably perished in the disaster

In many cases, the stigmatization of a person as a “professional criminal”, “asocial” or “vermin of society” continued to make itself in the family even after the end of the war. This may have been the reason why no one in Melanie Haarmann’s family talked about Ernst Egon. She herself was not afraid to confront her great-uncle’s fate. The receipt of his personal possessions aroused her curiosity and inspired her to look for more information on this chapter in the Haarmanns’ past: “It’s fascinating how the history of my family suddenly links up with ‘big history.’”