Tracing the owner of a signet ring 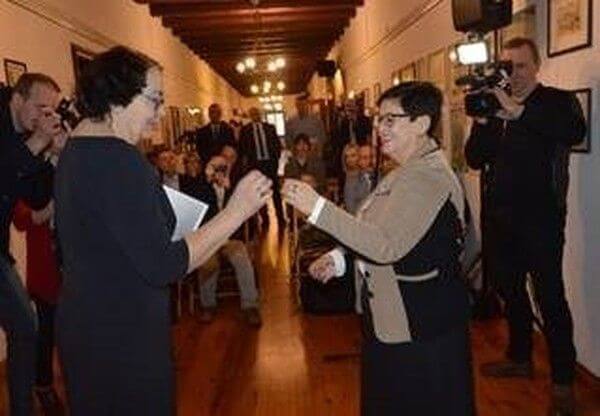 Malgorzata Przybyla, an employee at the International Tracing Service (ITS), recently returned the personal possessions of a former concentration camp prisoner to his relatives in Poland. The objects included a signet ring. It played a special role in the search for this family.

How did the search for the relatives of Tadeusz Tomaszewski start?

I appeared on Polish television and showed the possessions of Tadeusz Tomaszewski. Two weeks later, I heard from a group of amateur historians in Gostyń, the city where Tomaszewski last worked. They said they would help us find his family.

What clues did you have at that point?

We didn’t know much more than that he was a prisoner in the Neuengamme concentration camp. But we had documents, such as his vaccination record, along with many photos and a signet ring. The search started with his place of birth. It was not easy to find the old documents, because this town was part of a different district. One of the amateur historians looked through many archives and asked a number of people for help. Two things were especially useful here: the photos that helped to identify him, and a note in the birth register that stated Tomaszewski had been declared dead by a court. This was a very important clue.

How do clues like this help you find more information?

It meant that we had to find the documents from the proceedings to determine who had submitted the application at the time. We didn’t have any other avenues of inquiry open to us. I turned to the IPN, the Polish Institute of National Remembrance, where we found out that his parents had filed the application. At the time they lived in a small town near Krotoszyn. It turned out that the house is still occupied by his niece, the daughter of Tadeusz Tomaszewski’s sister. So I contacted her.

…and you were able to return her uncle’s signet ring and other personal possessions.

Yes – the signet ring was especially interesting. It helped significantly with the search. This made it possible to identify Tomaszewski in the many pictures from Gostyń from before the war. Among other things, the amateur historians found a photo of him as a young man at a fire department celebration – he always wore this ring.

It must have been very special to return such a personal item.

Yes, it was all very ceremonial. The possessions were returned in the museum in Krotoszyn, with representatives of the local press, the mayor and the museum director. The family was very touched to have the objects again after so many years. His niece immediately put the ring on her finger and said she would never take it off again. The family recalled that their uncle was always very well groomed. He was a hairdresser by profession. The ceremony was even attended by an older aunt who had had her hair done by him. She told me he always smelled very nice.

Which documents were you able to return to the family?

We were able to return not only his personal effects and documents to his niece, but also copies of her brother’s birth certificate. This is held in the ITS archive, along with documents that confirm that her parents were forced laborers.

What prompted the amateur historians to get involved in the search?

It was simply an act of human kindness. One of them put it very nicely: These people had no opportunity to write a will and determine who should receive their possessions. We are essentially fulfilling their final wishes.